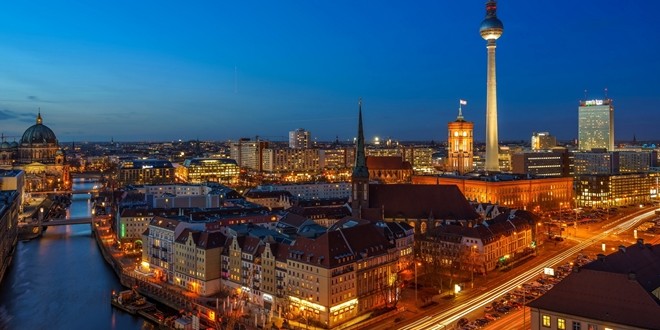 Berlin is a magnificent metropolis by any standards. It has a big city buzz as well as great parklands meandering waterways. There is fine architecture, world class art and an alternative lifestyle – this city can be as racy or as quiet as you wish.

First-time visitors will love the vitality, the bustling street life and fabulous nightlife. Those returning will be amazed at the way the city is constantly renewing itself. The former rundown district of East Berlin Friedrichshain is now a buzzing area with bars, galleries and cafes. The Reichstag, the parliament build of the united Germany (formerly in Bonn), and its dome have iconic status. Strolling down the grand Unter Den Linden, the spiritual heart fo the city, you see The Brandenburgh Gate now beautifully restored. From rooftop terrace of The Reichstag you can get your bearings with a view of the whole city.

There are plenty of museums from the Pergamon (ancient sculpture and artefacts), The Story of Berlin, the celebrated Jewish Museum and the Film Museum with some of Marlene Dietrich’s dresses on display.

The Gay Scene in Berlin is as diverse as the city´s districts. In most parts of Berlin gay people are as accepted as anyone else. In the main districts, Kreuzberg, Schöneberg, Mitte, Friedrichshain & Prenzlauer Berg, same sex couples can be seen, like any other couples, kissing and holding hands. Because of this acceptability, the gay scene is not limited to gay venues. Gay social life is one of the many threads which make Berlin and add to its amazing character. In districts further away from the center and particularly to the East of Berlin, the presence of right wing elements means that same sex couples need to be more cautious about showing affection in public.

The scene here is a strong one with a lot of variety, something for everyone. Kreuzberg is a liberal, open-minded part of town, where gay life is most connected with the diverse pulse of the neighbourhood. Freidrichshain and Prenzlauer Berg are part of a newer scene in the east which feels like it’s very alive and still developing. Part of Prenzlauer Berg has already developed into a yuppie scene which is in sharp contrast to the more happening and less-developed parts. The main areas for the gay scene are essentially around the north-east of the Tiergarten and to the south-west with a few places to the south-east.

We’re here with Itamar S.N., the author of the new novel, White Smoke. Your book …