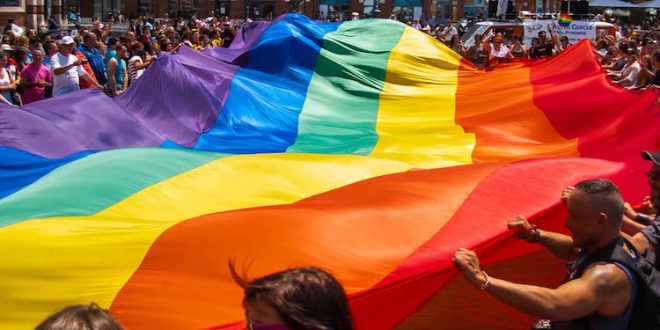 Crossdressing Student Matthew Alex McLendon, shown dressed as a female, was ‘invitd to withdraw’ from private high school earlier this month. ‘Alex wasn’t causing any problems. She got along well with everybody,’ said classmate Meayghan Denkers.

CARROLLTON, Ga. – Patrick Nelson had heard there was a cross-dressing boy enrolled at his high school. But darned if he could figure out just who it was.

“I looked for him the first couple of weeks. The honest truth – I didn’t even know,” Patrick said.

One day, he was talking about the mystery to a friend, who smiled and pointed to the pretty blonde at the desk next to his.

But while Patrick and his friends were willing to accept Matthew “Alex” McLendon’s feminine appearance and mannerisms, others in this rural conservative western Georgia community of about 20,000 weren’t.

And so 15-year-old Alex withdrew from school under pressure, leaving supporters of the popular, easygoing student wondering what threat they had supposedly been protected from.

“Alex wasn’t causing any problems. She got along well with everybody,” said classmate and friend Meayghan Denkers. “She wasn’t trying to change anybody to be like her or anything.”

After a heated meeting of the board of the small, private Georgian Country Day School on Oct. 6, Alex was “invited to withdraw” or face expulsion. Alex, who had enrolled in September after attending public school, was cited for wearing a tongue ring, but had been called before school authorities earlier about his female dress, makeup and hairstyle.

Most of Alex’s classmates – including some of the boys – wore bows in their hair in protest until ordered to remove them by the principal. Some indignantly quoted their school handbook, which urges acceptance of “diversity in opinion, culture, ideas, behavioural characteristics, attributes or challenges.”

“Alex represents something that’s way beyond the experience and the comfort zone of the very conservative people we live with,” said Lori Lipoma, Meayghan’s mother and a drama teacher at the school. “I really think we all lost something very precious that night.”

School officials would not discuss the case.

“We make no comments on students,” said Rex Camp, chairman of the board of the school, where tuition is more than $5,000 a year for the 50 or so high school students. Kindergarten and elementary students are in a separate building, but one parent of a 6-year-old expressed concern at the board meeting about Alex’s effect on younger children.

“I believe in sexual standards in society, and I want my child in a school that holds the same sexual ethics that I do,” said Craig Neal.

Alex, who speaks in a soft, feminine voice, began cross-dressing two years ago and considers himself “95 percent girl.”

Larry Harmon, a Dade County, Fla., psychologist who counsels parents in sexual identity, said such feelings appear to fit a rare condition called gender-identity disorder. He said it doesn’t necessarily imply homosexuality, and it’s difficult to know how many youngsters have it and why.

“I’m not homosexual,” Alex said. “I just look like a girl and I dress like a girl. It wasn’t anything flamboyant, not sequins or anything. But because I’m a guy….”

He enrolled in night school but quit in less than a week because he didn’t feel the courses offered would help his education goals. He hopes to pursue a career in fashion merchandising and modelling.

Alex said Thursday he’s looking into the possibility of home-schooling.

“I do wish I was still at the Georgian School,” he said.

At the Georgian Country Day School – where Alex said he enrolled to get a better education – he struck up a friendship with Meayghan and was soon invited to spend nights at her house. The first few times, Meayghan’s mother popped in on them unannounced just in case.

“They’d be sitting there doing hair, or painting nails, and I said to myself, ‘This is a girl,'” Lipoma said.

A few weeks into the school year, he and his father were summoned to a meeting with school officials. They said that parents had complained, and that he had to dress like a boy, Alex recalled. He refused. A special board meeting followed.

Under the law, a public school would have to show that Alex was disrupting education or undermining safety. A private school has more leeway.

Alex’s mother died when he was young. He said that his cross-dressing initially caused a rift with his father, but that the older man stood with him in the dispute with the board. Mack McLendon declined an interview.

“School is supposed to be preparing you for life,” Alex said. “Parents are trying to protect their kids by covering their eyes. It’s going to be a real shock for some of these parents when their kids get out into the real world.”

Previous Female to Male: Sex Reassignment Surgery
Next Some Notes on the Special needs of Young Transsexual People