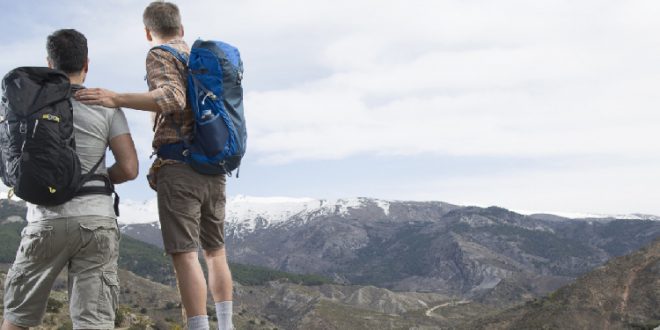 I”ll start with a tribute to Denmark. In 1989 it became the first nation in the world to recognize registered same-sex partnerships. Visit its capital, Copenhagen, and have a drink at Europe’s oldest openly gay bar, Centralhjørnet. It opened in the 1950s.

I’m proud to mention New Zealand. It’s a small country that refuses to be pushed around. It defied America by not allowing nuclear submarines stations or docking places. It passed same-sex marriage in 2013, leaving Australia behind. In 1998 New Zealand was the first country to adopt the label “Gay/Lesbian Friendly”in matters of tourism and business. It is the home of the talented Topp Twins. These lesbian twins have delighted audiences with comedy, yodeling and activist singing. They dress in drag and have audiences howling in the aisles.

In 2014, Toronto hosted World Pride. I was there and it was amazing. I watched police women in uniform holding hands with their girlfriends or wives. Same-sex marriage came to Canada in 2005. Spain just beat us by months. Toronto’s The Village, located in Church-Wellesley, is the cultural hub of the city, bursting with galleries, theatres and gay-friendly businesses. Home to events such as Pride Week Celebrations, Pride March and Dyke March, gay sub-culture has blossomed and thrived in The Village for decades and it will soon be home to the world’s first gay-focused athletic centre at 519 Church St.

Located approximately 100 miles east of Los Angeles, Palm Springs is a sun-seeker’s paradise where the sun shines almost all year round and where the city has embraced everything gay. Palm Springs provides the LGBTQ traveller with an amazing array of outdoor activities, excellent shopping and dining, and the world’s best poolside lounging. Palm Springs also offers the largest volume of male- and female-only accommodation anywhere in the world (many of these places are clothing-optional).

Ole! Spain legalized same-sex marriage in 2005 despite forces from the Catholic Church trying to block it. History has made many Spaniards remember that the Church sided with the Fascist Dictator, General Franco, in Spain’s Civil War.

The coastal city of Sitges rests approximately 35km southwest of Barcelona. Sitges is home to Spain’s first ever gay disco which opened back in the 1980s.

While Copenhagen may have the oldest “openly gay” bar, Berlin had discrete (sometimes hidden) gay bars that can date back to the 1920s. Gay flags are flown openly outside bars and restaurants. The districts of Schöneberg (which hosts Gay Pride), Kreuzberg and Prenzlauerberg provide a diverse range of clubs, bars and restaurants for sampling. With no ‘closing time’ in Berlin, the party never ends!

When I think of Greece, I think of Sappho. Many lesbians have made the pilgrimage to the island of the goddess. Trish and I have placed it on our ‘bucket list’ of places to go. It was Jackie Onassis (wife of President Kennedy) who brought the island of Mykonos to world attention in the 1970s. Like so many Greek islands, Mykonos has it whitewashed houses flanked by the deep blue Mediterranean Sea.

For a less hedonistic holiday, the sandy beaches, crystal clear waters and pine forested hills of Skiathos offer a relaxed and authentic experience for the LGBTQ traveller

The Stonewall riots that occurred in the late ’60s in Greenwich Village are synonymous with the birth of the modern gay-rights movement. The incredibly inclusive communities of the West Village, Chelsea and Hell’s Kitchen provide a fabulous array of gay-friendly accommodation options. Littered with significant LGBTQ landmarks such as Christopher St, the Harvey Milk School, the Lesbian Herstory Archives and, hello, Broadway and the Theater District, New York is a gay traveller’s mecca.

The world’s northernmost capital, Reykjavik, has been described as one of the friendliest places and most inclusive on Earth. In 2015, Reykjavik will host its 17th Gay Pride march (one of Europe’s oldest LGBTQ parades), and the 11th Bears on Ice event. Iceland also has some of the world’s most progressive laws. In 2006, same-sex couples were granted equal rights with their heterosexual counterparts without limitation. Wander behind waterfalls, descend into dormant volcanoes, or while away a day in one of the many geothermal lagoons – this is an adventurer’s paradise.

What an accomplishment! Uruguay, the smallest of the South American countries, legalized same-sex marriage in 2013. It was beaten by Argentina, that legalized marriage equality in 2010.

The relaxed attitude present in the Uruguayan capital of Montevideo provides a brilliant juxtaposition to the hustle and bustle of the likes of Buenos Aires.

Some of these places may be beyond your budget. However, there are ways to travel. Have you considered working on a cruise line? Would you exchange your home with a gay person(s).?

Can you take time off to house/pet sit? Would you consider working for an airline or travel agent? Then, there’s also the lottery and dreams! paula.

@newslgbti
Previous Gay Marriage: Quotes of Tolerance and Inspiration
Next Women and Bisexuality