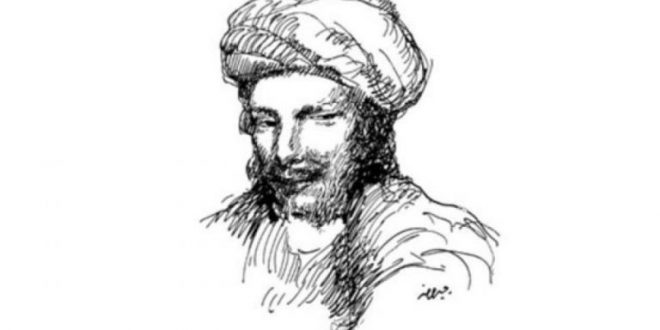 Abu Nuwas, the first and foremost Islamic gay poet. Abu Nuwas, “Father of Curls,” so named for his long flowing hair that hung down to his shoulders, was the greatest Arab poet of his time, or as some claim, the greatest Arab poet of all time. His full name was Abu Nuwas al-Hasan ibn Hani al-Hakami. Abu Nuwas’s mother, Golban (Rose) by name, was a Persian weaver, and his father, whom he never knew, a soldier from Damascus. The mother sold the young Abu Nuwas (b. 756) to Sa’ad al-Yashira, a Yemeni druggist, who took him from Ahvaz, the town of his birth (presently in south-western Iran) to his home in Basrah (presently in south-eastern Iraq), in those days a great seaport, and abode of the mythical Sinbad the Sailor.

In Basrah, the boy studied the Qur’an and grammar at mosque. His grace and beauty attracted the attention of his older cousin, the handsome blond poet Waliba ibn al-Hubab (d. 786). The druggist having granted the boy his freedom, Waliba became his lover and teacher, taking his student to live with him in Kufa. A couple of year later, the adolescent Abu Nuwas returned to Basrah to study under Khalaf al-Ahmar, a master or pre-Islamic poetry. He then spent a year among the Bedouin (desert nomads) to gain purity of language. But the young man, already a lover of the finer things in life, was not enamored of the primitive life of the ascetic nomads:

Critic, relent!
Your hope for repentance
Will meet with disapppointment.
For this is the life,
Not desert tents,
Not camel’s milk!
How can you set the bedu
Beside Kisra’s palace?
You, mad to expect repentance,
Tear your robe all you want;
I will never repent!

Abu Nuwas set aside older, traditional writing forms for drinking songs (khamriyyat) and witty, erotic lyrics on male love (mudhakkarat and mujuniyyat) that resonate with an authenticity born of experience, soon becoming famous, if not notorious. His love poems celebrate love for a beautiful boy, often embodied in the figure of the saqi, the Christian wine boy at the tavern. The theme was picked up time and again over the ensuing centuries by the best poets of Iran and Arabia, such as Omar al-Khayyam, Hafiz, and countless others who shared his tastes.Around the time the young Harun al-Rashid ascended to the throne, Abu Nuwas set up shop in Baghdad, in those days capital of both Arabia and Persia. The time was a golden age of Arab culture and learning, and the city was the biggest in the world of its day. Perhaps he was hoping to curry favor with the new caliph, a more enlightened ruler than his brutal predecessor. However, being a court poet exposed Abu Nuwas to the whims and vagaries of an absolute monarch. Though not as capricious as some, Harun al-Rashid was conscious of having to maintain the aura of propriety incumbent upon the Defender of the Faith, and more than once threw Abu Nuwas into prison for his drinking and his impertinent verse.

The final break came shortly after Harun al-Rashid ruthlessly crushed the Barmakis, one of the leading families at his court and his closest friends and advisers. Abu Nuwas, a friend and client of the enlightened and generous Barmakis, wrote an elegy to them in response. Forced to flee into exile to escape the wrath of the caliph, he made the Hajj to Mecca and traveled as far as Egypt. He was only able to return years later, after the death of al-Rashid in 809. The new caliph, Muhammad al-Amin, aged 22, who had inherited the throne, welcomed back Abu Nuwas, his old teacher, with open arms. Unlike his father, Al-Amin shared the poet’s tastes for hunting, wine and boys, and was famous in his own right for his affair with his eunuch. But even he grew impatient with the poet, and had him thrown in jail for his exploits at the tavern table, as we can deduce from the following poem:

What a lesson, O, Ibn ar-Rabi, have you given me
And the excellent habit of austerity.
Not as pointless, not as dumb, my inclination now
Tends to chastity and solitude.
…
Want to witness an amazing matter?
Set me free, and see how often God I flatter.
I have been so long in jail,
Will happiness come from your generosity?

Abu Nuwas however outlived caliph al-Amin as well, who lost his life in a war over the succession waged by his brother only four years after ascending to the throne. The new caliph, Abdullah al-Mamun, was a patron of the arts and sciences as well, but no great friend of drinkers and lovers. There are conflicting stories about the death (ca. 815) of Abu Nuwas. Some say he died in prison, some that he was poisoned. Fortunately, much of his poetry has survived, thanks to his patrons of the day. In his eloquent odes one can see his ongoing battle with the imam. At times he is defiant:

Always I have and will
Scatter god and gold to the four winds.
When we meet, I delight in what the Book forbids.
And flee what is allowed.

I bought abandon dear
And sold all piety for pleasure.
My own free spirit I have followed,
And never will I give up lust.

But Abu Nuwas was quick to change his tune, if that was the price for getting out of jail:

What has become, said I, of my tender youth,
Given over to pleasure, each day, each night?
All possible mischiefs I am guilty of.
Forgive me, Allah. I hear and I tremble.

I die of love for him, perfect in every way,
Lost in the strains of wafting music.
My eyes are fixed upon his delightful body
And I do not wonder at his beauty.
His waist is a sapling, his face a moon,
And loveliness rolls off his rosy cheek
I die of love for you, but keep this secret:
The tie that binds us is an unbreakable rope.
How much time did your creation take, O angel?
So what! All I want is to sing your praises.

For young boys, the girls I’ve left behind
And for old wine set clear water out of mind.
Far from the straight road, I took without conceit
The winding way of sin, because [this horse]
Has cut the reins without remorse,
And carried away the bridle and the bit.

to those letting on that sex can cost money,

…
A gentle fawn passed around the cup
Delicate of waist and slim of flank,
“Will you be on your way, come morn?” he chirped.
“How can we bear to leave?” came the reply.
He glided among us and made us drunk,
And we slept, but as the cock was about to crow
I made for him, my garments trailing, my ram ready for butting.
When I plunged my spear into him
He awoke as a wounded man awakes from his wounds.
“You were an easy kill,” said I, “so let’s have no reproaches.”
“You win, so take what you will, but give me fair reward.”
So after I had placed my saddle bag upon him he burst into song,
“Are you not the most generous rider ever, of all Allah’s creatures?”

and on to others which we today would have to qualify as odes to rape:

O, starry night of good omen,
When drunkard mounted drunkard,
We whiled away the time in worship to the Devil,
With fervent faith,
Until the monks rang death’s bell and dawn,
And the young lad took off, dragging his delightful robe
Touched by my impure desire.
“Woe is me,” he said through his tears,
“You have torn away the dignity I had long treasured.”
“A lion saw a gazelle and lunged at it,” said I,
“Such are the vagaries of fate.”

Abu Nuwas’ outrageous deeds were immortalized in The Thousand Nights And A Night, a collection of ancient tales from Persia, India, and Arabia dating to the ninth century, in which he appears as a ribald folklore character, together with many other historical figures of his day. His best poetry, imitated but never equaled, celebrates hunting, the love of wine, and the love of boys, diversions widely appreciated by educated Muslims everywhere, despite the ongoing fulminations of fundamentalists.