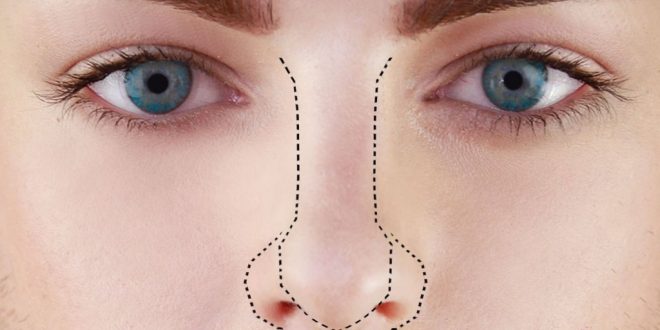 Nasal surgery or rhinoplasty alters the appearance of the nose by shaping and repositioning the nasal bones and trimming the bone and cartilage as needed to create the desired appearance. As example, rhinoplasty is used to correct a large hump, or a broad or round nasal tip.

Rhinoplasty is not a new procedure. While many refinements have occurred, the basic operation was developed over 60 years ago.

The nose is the most prominent feature of the face. From our experience, many transgender individuals find nasal refinement to make one of the most marked improvements in facial appearance. Small changes, such as subtly lifting the tip of the nose will often create a more youthful and feminine appearance. Also, reducing brow ridges, if excessive, can additionally improve the feminine appearance. But rarely, however, do we see any significant improvement in overall feminization from lower (jaw) reshaping. If facial recontouring is expected, nasal surgery should be planned afterwards for the best result.

While nasal surgery can make a dramatic improvement, we unfortunately find the widest range of outcomes to occur with this surgery; the rhinoplasty procedure is highly comprised of technical expertise, artistic nuance, and taking the time to understand the needs of the patient. For this reason, special attention should be given to seeking the services of a surgeon who specializes in rhinoplasty. Additionally, combining this intricate surgery with other facial procedures may compromise the final result.

Rhinoplasty can be done under local anesthesia with some sedation, or by general anesthesia. Usually, rhinoplasty is a day surgery procedure, where you do not need to sleep overnight in a hospital. Following the surgery, a splint will be taped over the outside of the nose for a week after the surgery and you may have some soft rubber drains placed inside the nostrils.

Rhinoplasty usually takes between one and three hours. During surgery, the skin of the nose is separated from its supporting framework of bone and cartilage, which is then sculpted to the desired shape. The nature of the sculpting will depend on your problem and your surgeon’s preferred technique. Finally, the skin is redraped over the new framework.

Many plastic surgeons perform rhinoplasty from within the nose, making their incision inside the nostrils. This method does not produce an external scar. Another technique involves an “open” procedure, and may be used in more complicated cases. A small incision is made across the columella, the vertical strip of tissue separating the nostrils. Whether incisions are made inside the nostrils or at the base of the nose, access is provided to the cartilage and bone, which can then be sculpted into shape.

When the surgery is complete, a splint will be applied to help your nose maintain its new shape. Nasal packs or soft plastic splints also may be placed in your nostrils to stabilize the septum, the dividing wall between the air passages.

During the first twenty-four hours following surgery, your face will feel puffy, your nose may ache, and you may have a dull headache. Most discomfort can be controlled with the pain medication prescribed by your surgeon. Plan on staying in bed with your head elevated (except for going to the bathroom) for the first day.

You will notice that the swelling and bruising around your eyes will increase at first, reaching a peak after two or three days. Applying cold compresses will reduce this swelling and make you feel a bit better. In any case, you will feel a lot better than you look. Most of the swelling and bruising should disappear within two weeks or so. Some subtle swelling, unnoticeable to just about anyone, will remain for several months.

A little bleeding is common during the first few days following surgery, and you may continue to feel some stuffiness for several weeks. Your surgeon will probably ask you not to blow your nose for about a week while the tissues heal. You can also expect some discharge from the nose for one or two weeks and occasionally longer. The areas of the nose operated on are often numb for several months following surgery. For this reason, you should protect your nose from extreme cold or sunburn.

If you have nasal packing, it will be removed after a few days. Removal of the packing will allow you to feel much more comfortable. By the end of one or, occasionally, two weeks, all dressings, splints, and stitches should be removed.

While the operation takes six months to one year to achieve the permanent result, your new nose is visible once the dressing and splints are removed.

When a somewhat large nose is recontoured to a smaller, more refined female shape, flaring of the nostrils may occur. When the nose has normalized (possibly six months to a year later), the nostrils may need to be reduced in size. One method is the Weir excision. An incision is placed in the crease at the junction of the nose and cheek and a wedge of the nostril is removed. With this procedure, a scar will remain. The scar can become heavy, and if it contracts, a notch may appear at the nostril rim.

Another approach in reducing the size of the nostril opening is the nasal floor excision. Here the removal of a wedge of tissue occurs from the floor of each nasal opening. This more conscientious approach typically hides the incision just inside the opening of the nostril.