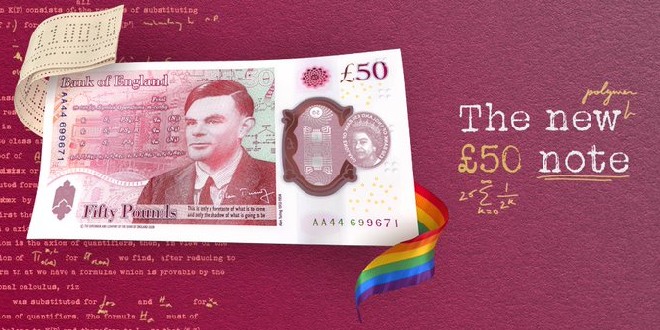 The Bank Of England has unveiled plans to issue a new £50 note that features mathematician and gay icon Alan Turing. The note is scheduled to be released on June 23, 2021 during Pride Month. Turing is the first gay man to be featured on a UK banknote.

The new £50 note featuring Alan Turing is coming on 23 June 2021. Find out about its design and security features: https://t.co/nbOlU9kgCU #TheNew50 pic.twitter.com/FhPBJAVFP6

Turing is credited with cracking intercepted codes that helped the Allies defeat the Nazis during World War II and played a crucial role in the development of early computer machines.

After WW II, in 1952, Turing was prosecuted and convicted for homosexual acts. As an alternative to prison, he accepted chemical castration as punishment. He died by suicide in 1954 by cynaide poisoning.

In 2013, Queen Elizabeth II granted Turing a posthumous pardon. The 2017 law that grants retrospective pardon for gay men convicted for homosexual acts is often referred to as the Alan Turing Law.

“Alan Turing provided the theoretical underpinnings for the modern computer. While best known for his work devising code-breaking machines during WWII, Turing played a pivotal role in the development of early computers first at the National Physical Laboratory and later at the University of Manchester,” Bank of England said in a statement.

“He set the foundations for work on artificial intelligence by considering the question of whether machines could think. Turing was homosexual and was posthumously pardoned by the Queen having been convicted of gross indecency for his relationship with a man. His legacy continues to have an impact on both science and society today.”