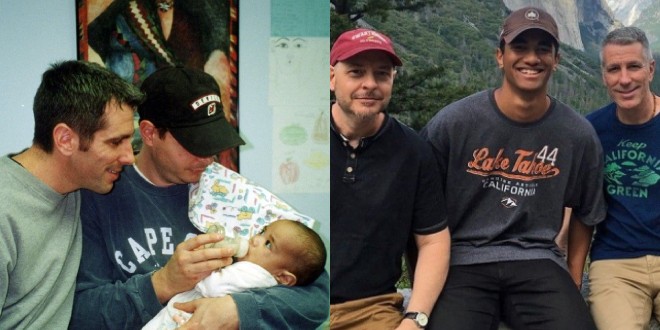 A Gay Couple Have Shared Their Incredible Story

A Gay Couple Have Shared Their Incredible Story

A gay couple have shared their incredible story of becoming first-time dads after finding an abandoned baby at a New York subway station 20 years ago.

A gay couple have shared their incredible story of becoming first-time dads after finding an abandoned baby at a New York subway station 20 years ago. https://t.co/cE2vDfZtBw pic.twitter.com/PmeJJ6RZox

Danny Stewart was commuting to meet partner Pete Mercurio in August 2000 when he spotted what he thought was a baby doll in a corner of the station.

Walking upstairs, Danny looked back only to notice the baby’s legs move, he told BBC News.

Now twenty years later, the couple have spoken of how they adopted and raised the baby boy.

“He didn’t have any clothes on, he was just wrapped up in this sweatshirt,” Danny recalled.

“His umbilical cord was still partially intact, so I could tell he was a newborn. I was thinking maybe a day or so old.”

Danny, who worked as a social worker, called the police from the train station who took the child.

After police appeals and media coverage, Danny testified before a family court judge.

The judge explained the baby would go into pre-adoptive foster care. But his next question was a surprise for Danny.

“Would you be interested in adopting this baby?” the judge asked.

He quickly agreed, recalling that he would always feel “connected” to the baby.

“I felt like this was not even an opportunity, it was a gift, and how can you say no to this gift?” he said.

They brought the child home for Christmas that year and welcomed him into their family. They named him Kevin.
The formal adoption process took six to nine months in total, involving background checks and parenting training for the couple.

Pete later made his son a picture book detailing how he was found in a subway station to help him understand where he came from. It became his “favourite” book, Pete recalled.

“We’d often catch Kevin flipping through the pages by himself and mouthing the words he had memorised,” he said.

“This was the sweetest thing in the world to witness.”

In 2011, the couple married in New York. Their wedding celebrant? The judge who had presided over that original family court hearing.

Today, Kevin is 20 and is studying mathematics and computer science at university.

Reflecting on his family, Danny told the BBC, “I can’t imagine my life if it didn’t turn out this way.

“My life has become much more enriched and full. It has changed my world view, my perspective, my whole lens.”