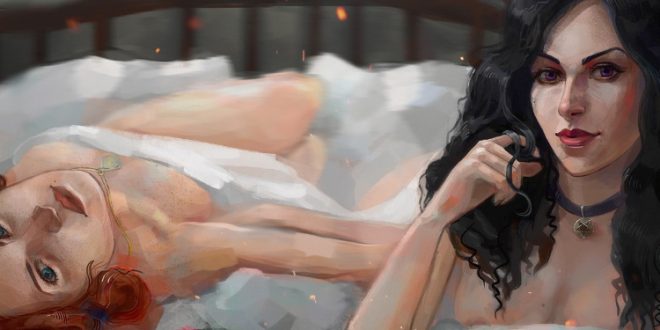 Cinema films stand out among the cultural productions that deal with social and political issues and they have tried to give a message to people. Lesbian movies that once again prove that love is far beyond gender stereotypes.

It is about a maid’s secret love for her lady who is hired by a crook. In the story set in the 1930s, a crook who introduces himself as the Count plans to make him fall in love with him to seize the wealth of the mysterious and naive-looking Japanese heir, Lady Hideko. He hires Sook-hee as a maid to the Lady to help her. But it will be messy for this maid to fall in love with her unaware lady …

There are two things that 15-year-old Adele is sure of; she is a girl and girls date boys she. One day she notices Emma’s blue hair in the big square and then realizes that her life will change. All alone with her own adolescent questions, she turns her gaze to herself and the gaze of others to herself. She lives in love with Emma as a woman, as an adult. But Adele is unable to make peace with herself, with her family, or with this absurd world.

The Favorite is about the struggle between Queen Anne’s right-hand man, Lady Sarah, and the new maid, Abigail. While the poor Queen Anne sits on the throne of the country, her advisor and secret lover, Sarah Churchill, the Duchess of Marlborough, deals with the queen’s deteriorating health and her changeable temperament, while also ruling the country instead. Newly arrived maid, Abigail, impresses herself with Lady Sarah with her charming. When Sarah takes Abigail under her wing, Abigail also gets a chance to return to her aristocratic roots. When the politics of war become too time-consuming for Sarah, Abigail takes on the task of being the queen’s friend. Their commendable friendship gives Abigail a chance to fulfill her ambitions. Abigail will no longer allow any woman, man or political move to get in her way …

Adepero Oduye Alike is a 17-year-old girl who lives in Brooklyn with her mother Audrey, father Arthur and younger sister Sharonda. Alike, who has to live in an environment where she does not feel belonging, tries to discover her own sexual identity. Alike, who accepts her sexual orientation and tries to live accordingly, encounters the pressure of her environment and society. Not sure how much she can pour into her family, Alike is determined to overcome her problems with honor, joy and determination. a

Carol is a well-known figure in New York in the 1950s. She wants a divorce from her husband and fights for the custody of her daughter. Therese works in a boutique. The paths of these two worldly women, Carol and Therese, intersect in this luxury boutique in Manhattan. As soon as Carol sees Therese, she is struck by the young woman’s beauty. But there is no place for this forbidden love in Carol’s community yet.

Carmen y Lola tells the story of two women trying to live their love despite all difficulties.

Nic and Jules are a married lesbian couple living in California. Through artificial insemination using sperm donation, both have a child. Kids named Joni and Laser want to meet their real fathers when they reach puberty. The donor named Paul, whom they reach out using their rights, finds out that they are their father and arranges a meeting with him. The three meet at Paul’s workplace. Laser, who wanted to meet Paul at first, was not very pleased after the meeting, but Paul’s bohemian life attracted Joni. Things unfold when Paul meets Nic and Jules, whom he is a donor.

The Swedish-made lesbian-themed movie is about the story of two women named Mia and Frida who met at their parents’ engagement. While Mia’s father, Lasse, marries Frida’s mother, two women in their thirties inevitably become half-sisters. The two, who started to spend time together, will gradually start to like each other and this closeness will cause dramatic results.

16-year-old Cyd, who was severely traumatized as a child, goes to Chicago to spend the summer with his aunt Spence. Cyd, who has the opportunity to get to know his aunt who is a writer better during the summer break, meets Katie, who works at a coffee shop. Cyd soon begins to be attracted to someone and begins to question many things about sexuality. In this film, Stephen Cone is about a woman stepping into the real world with natural acting and unexpected poetry.

Disobedience is based on a woman named Esti Kuperman (Rachel Weisz). After the death of his former rabbi father, Esti returns to his Orthodox Jewish family home in London. However, the life he has established for himself and the beliefs of his family and environment are now different. This conflict of belief will surface when Esti begins to take an interest in her childhood friend (Rachel McAdams), whom she sees again.

Kena and Ziki are two quite different young girls living in Nairobi residences. In a conservative society, young people who approach each other lovingly against the political rivalry between their families struggle together to realize their dreams. But when Kena and Ziki fall in love, they have to make a difficult choice.

Snapshots tell the story of 3 generations. Her granddaughter finds a roll of film and the grandmother remembers her love for her best girlfriend in the past.

Nina, a teacher in her 30s, is looking for a surrogate mother with her husband, now that they want to have children. Eventually they find a suitable candidate, but Nina falls in love with the woman who will give birth to her child.

Alba and Natasha’s paths cross in Rome on the night of December 22nd. Choosing an ordinary hotel room for themselves, these two young women will tell each other about their lives, share their most secret secrets and discover each other’s bodies during the night. For both, tonight will be an adventure of self-discovery, but it will remain a secret that only them know for life.

Tell It to the Bees chronicles the love of a single mother abandoned by her husband and a doctor who recently returned to her old town. Lydia, who tragically ended her marriage, knocks on Jean’s door after her child Charlie was attacked at school, and the story begins …

32-year-old Lizzie is an unmarried woman forced to live under her father’s unpretentious and authoritarian control. However, this situation begins to change with the arrival of young maid Bridget Sullivan. While Lizzie gets the chance to get closer to young Bridget with a likeable, kind spirit, Bridget doesn’t leave her feelings unrequited. However, the story of the two began to evolve towards a dark, disturbing ending. It’s going to be extremely difficult for Lizzie who gets the chance to unleash her emotions with this relationship.

The sudden passionate love affair between Jasmine and Dallas will radically change the lives of both women.

Based on a true story, “Vita & Virginia” explores the passionate relationship between one of the most successful writers in literary history, Virginia Woolf (Elizabeth Debicki) and the mysterious aristocrat Vita Sackville-West (Gemma Arterton). When the two cross paths, Vita decides that Virginia will be his new conquest, no matter the cost. The fruit of the relationship that began between the glamorous Vita and the charming, stubborn and talented Virginia is Woolf’s daring and experimental novel “Orlando.”

@newslgbti
Previous Does Islam Support the Burning of Homosexuals?
Next Lesbian women are more accepted than gay men