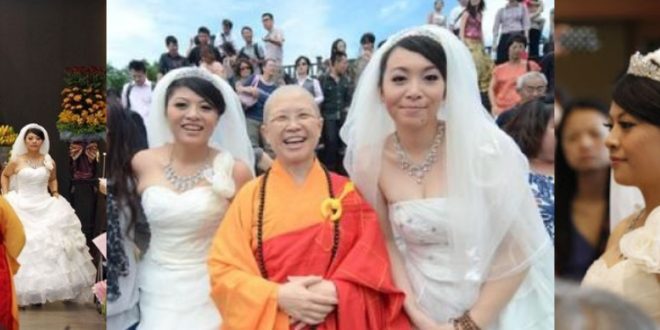 Two hundred and fifty guest gathered at the Hongshi Buddhist Seminary outside Taipei, Taiwan. Preparing to meet them were two 30-year old lesbians excited about a marriage that would make headlines world-wide.

Huang Meiyu and You Yating gathered their prayer beads which would be exchanged instead of rings. They walked out into a Taiwan sky filled with sunshine, and a small part of the earth filled with smiles and cheers. In less than an hour, this wedding would mark the first Buddhist blessed same-sex marriage in Taiwan or in Asia for that matter. It was August 11, 2012.

Some Reasons for Marriage

Huang told reporters that neither bride felt the need to legitimize their relationship over the seven years they had spent together.

A movie, “If These Walls Could Talk2,” made the couple re-evaluate their thinking. One of the characters in this move was unable to stay with her dying partner because she was “in the closet,” and there were no laws to protect either lesbian character.

Huang and You felt compelled to marry in order to bring them full and equal marital rights. They also wanted these rights extended to all homosexuals.

Could They Have a Buddhist Marriage?

Huang and You are committed Buddhists and have a spiritual and physical connection to Hongshi Buddhist Seminary. Both women were not sure if a Buddhist wedding ceremony could be performed for lesbians. Buddhist teachings on homosexuality are less defined that the Leviticus teachings of the Jewish Torah or Old Testament.

Some Buddhists ban gay sex based on precept against “inappropriate sexual behaviour.” In countries such as Japan, China and Mongolia, there has been a tradition that celebrated homosexuality and even encouraged it. The women, therefore, approached their teacher, Zhao Hui. Huang told reporters that Zhao Hui was delighted and invited the couple to have the ceremony at the seminary. Now, the couple could happily exchange their marriage vows in front of the monks, nuns, classmates and friends. Zhao Hui is constantly praised for letting her students come to their own moral conclusions.

In the case of a lesbian Buddhist wedding, Zhao Hui expressed to the happy couple that she did not see anything special or different about this relationship. The women were partners and committed to love.

As the couple exchanged prayer beads and vowed to a life-time of commitment, monks, nuns and friends chanted sutras to seek blessings for the couple. Officiating at the wedding was another Buddhist master, Shi Chao-hwei. She witnessed Huang Meiyu and You Yating exchange prayer beads and vows.

Shi Chao-hwei was asked questions on the first Buddhist same-sex marriage. She responded, “We are witnessing history. The two women ae willing to stand out and fight for their fate…to overcome social discrimination.” Shi Chao-hwei also pointed out that while Buddhism does not engage in ideological struggles, she played down criticisms that homosexuality is a sin, saying, “all lives are equal in the religion.” The families of the couple stayed away from the media, but several reports state that they love and approve of this commitment.

Pride Week in Taipei, draws over 60,000 homosexuals. The theme of the 2012 parade was for marriage equality. According to several polls carried out recently, many Taiwanese support same-sex marriage. Several bills have been presented to the Taiwanese government (as early as 2003), but with public opinion shifting in favour of equality of marriage, Taiwan is likely to be the first Asian country to approve it.

Our Love to the Newly Weds.

Belated greetings to Huang Meiyu and You Yating. Thank you for taking the bold steps for your fellow brothers and sisters. To all LGBT Taiwanese we wish you peace and happiness and the hope, that if you are longing to hear wedding bells, they will ring very soon. Whether you exchange prayer beads or rings, may your weddings be lasting moments of loving commitment.

@newslgbti
Previous How many Genders are there?
Next The Labrys: Claiming our Lesbian Heritage