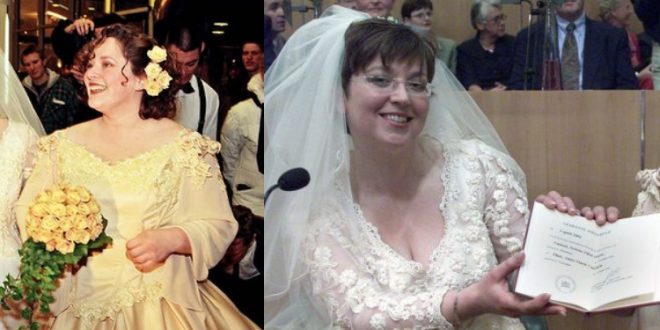 Who Were the First Lesbians to be Legally Married?

There names are Helene Faasen and Anne-Marie Thus, and their civil wedding was approved by the law of the Netherlands on April 1st, 2001. Holland was the first country to approve same sex marriage.

”We married for love, not politics. But of course we were aware it was an historic moment” said Anne-Marie

Her wife, notary Helene Faasen, added, ”By tying the knot in front of the world’s press, we wanted to make other people think about how horrible it is to be denied something that is a natural right for others. A heterosexual person never needs to think about whether he is allowed to marry or not, he simply needs to be lucky enough to find the love of his life.”

The Dutch couple shared their vows with three pairs of grooms. Since then, over 15,000 gay and lesbian couples have wed in the Netherlands – about 2 per cent of the total number of marriages registered between 2001 and 2010, based on figures from the Central Statistics Bureau.

According to the Amsterdam-based COC, the world’s oldest homosexual advocacy group, there are about a million gay, lesbian, bisexual and transgender people in the Netherlands out of a total population of 16.7 million.

Anne-Marie and Helene live with their two children, 10-year-old Nathan, and Myrthle, 9, in Maastricht in south Netherlands, where Anne-Marie says she loves to spend her free time cooking and Helene relaxes by tending the garden.

Their children were born from Anne-Marie and anonymous sperm donors.