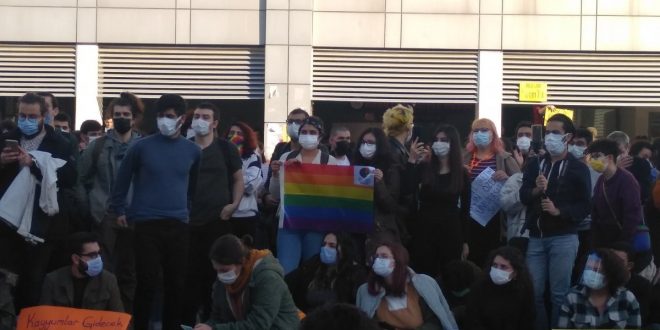 According to the news of Bianet, Presidential Communications Director Fahrettin Altun has shared a decision with the signature of rector Melih Bulu and announced that Boğaziçi University’s LGBTI+ Studies Candidate Club has been closed, arguing that the protests are “about it all.”

Turkey’s ruling Justice and Development Party (AKP) targeted the LGBTI+ community after Boğaziçi University students used a picture of Kaaba – a holy site for Muslims – featuring LGBTI+ flags in an exhibition during the ongoing protests.

The picture was on the floor to be hung as part of an exhibition at the university’s South Campus when Boğaziçi University’s Islamic Studies Club (BİSAK) noticed it and deemed it an insult towards Islam.

“We will never allow our Islamic values to be made fun of within our university. We don’t accept this immorality to be legitimized under the guise of art,” BİSAK said, which immediately drew the attention of pro-government and Islamist media outlets.

Presidential Communications Director Fahrettin Altun has announced that Prof. Melih Bulu, who has been appointed as the new rector of Boğaziçi University by President and ruling Justice and Development Party (AKP) Chair Recep Tayyip Erdoğan, has closed the LGBTI+ Studies Candidate Club over an investigation launched into a picture featuring the Kaaba, which also led to the arrest of two students at the weekend.

In the official document signed by Bulu and sent to the related units of Boğaziçi University, a reference was made to the investigation which led to the arrest of two students and house arrest of two others.

“The candidacy status of the LGBTI+ Studies Candidate Club has been lifted on the grounds of the activities subjected to the related investigation and organization of events without permission,” the decision has read.