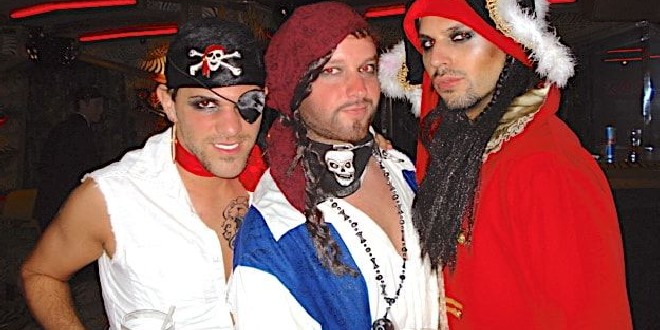 Homosexuality, or same-sex attraction and relationships, has been present in human societies throughout history, including among pirates. While little is known about the specific attitudes and practices regarding homosexuality among pirates, there is some evidence to suggest that it was present and may have been accepted in certain cases.

One of the key sources of information about pirates is the written accounts of sailors and other individuals who encountered them. These accounts contain several references to same-sex relationships among pirates, including the story of Anne Bonny and Mary Read, two female pirates who were said to have had a romantic relationship.

In addition to written accounts, there are also several examples of homoerotic imagery in pirate-themed artwork, including paintings and illustrations that depict male pirates embracing or kissing. These images suggest that same-sex relationships were not seen as taboo or unacceptable in pirate culture.

However, it is important to note that the evidence for homosexuality among pirates is limited and subject to interpretation. It is difficult to know for certain how homosexuality was viewed and accepted in pirate society, and further research is needed to better understand this aspect of their culture.

Overall, while the exact role and significance of homosexuality among pirates remains unclear, it appears that it was present and may have been accepted in some cases. Further research is needed to better understand the place of homosexuality in pirate society.