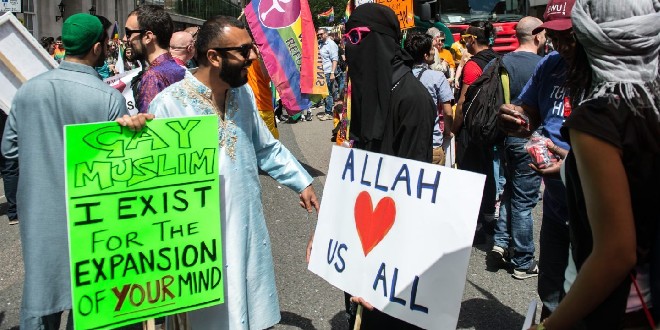 There is no doubt that in Islam homosexuality is considered ‘sinful’. Homosexuality as far as Islam is concerned is a profound mistake (as are all sins if they are not intending to do wrong). Islam believes that humans are not homosexual by nature and that people become homosexuals because of their environments.

The Holy Koran and Homosexuality

There are five references in the Koran that have been cited as referring to gay and lesbian behaviour. Some obviously deal with effeminate men and masculine women. Both references relate to gay sexual activities; lesbian practices are not mentioned in the Koran. The references seem to imply that there was no homosexual behaviour before it first appeared in Sodom. This is a uniquely Islamic concept; it does not appear in Jewish or Christian beliefs. The passage also links the sin of Sodom (the reason for its destruction) to homosexuality. That linkage is contradicted by other verses in the Hebrew Scriptures.

Treatment of homosexuals within Islam

According to a pamphlet produced by Al-Fatiha (an international organization for lesbian, gay, bisexual, and transgender Muslims), there is a consensus among Islamic scholars that all humans are naturally heterosexual. Homosexuality is seen by scholars to be a sinful and perverted deviation from the norm. Most Islamic schools of thought and jurisprudence consider gay acts to be unlawful.