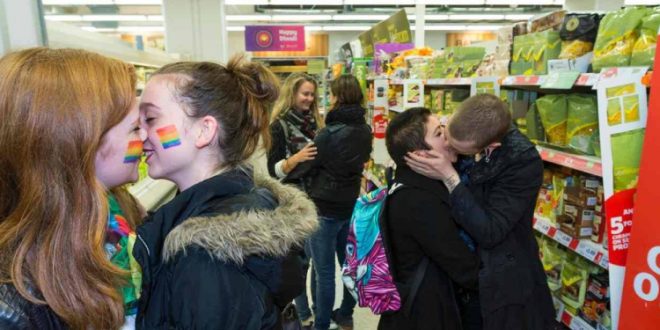 A naive and rather uninformed security guard tried to stop two lesbians sharing a kiss at a British seaside town of Brighton, England. Brighton is a Mecca for gays and lesbians and it is just about an hour’s drive by car from London.

The incident that sparked the protest happened last week when a customer complained about Annabelle Paige, a Sussex University student, and her partner kissing.

Ms Paige told The Times newspaper that she had only given her girlfriend a light kiss, but was told by a security guard to stop or leave the store. “I’m so shocked and upset about it. I get that if another customer is uncomfortable that’s a bad thing… but the problem is the other customer was in the wrong and essentially being homophobic. The guard didn’t seem to understand that, I was absolutely humiliated,” she said shortly after the incident.

Well, never underestimate people who stand up for equality whether they are gay or straight. The result was a “Big Kiss-In” has been held in the Brighton branch of Sainsbury’s. This is a nation-wide chain and the top brass wanted to get rid of the bad publicity generated by what was clearly a homophobic security guard.Kiss_In_3

Dozens of people – men and women, including one couple in wedding dress – descended on the store on Wednesday as bemused shoppers looked on.

Video footage of the event shown by ITV News showed a number of couples, some in fancy dress, kissing as people held signs with supermarket-style slogans like “Live well for lez”.

Sussex University’s students union said in a tweet: “Thanks to everyone who took part in the #bigkissin. Great to see people in Brighton and beyond showing we like kissing and hate homophobia.”

P.S. Trish and I visited Brighton in the spring of 2014 and we had a great time. Lesbians in pubs chatted with us and welcomed us to their wonderful seaside resort. Hello and well-done, Brighton!