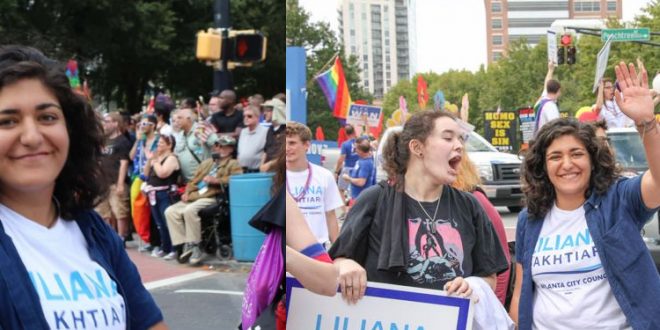 Liliana Bakhtiari was born in Atlanta Georgia and attended her first protest march when she was 8 years old.

Liliana’s father is a first generation Iranian immigrant that engaged in community service and acts of social justice. Her mother put Liliana’s father through university where he became a pharmacist. Working as a young person in her father’s pharmacy, Liliana was exposed to the poverty of Sweet Auburn, a district of Atlanta. Her father made medicine affordable to people who could not access it.

She is now running for Atlanta City Council.

In various interviews, Liliana reports the hurtful racism that she endured in school. In high school racist taunts such as “how many goats would she be worth on her wedding day?” Due to traditional practises, Liliana was not allowed to shave her legs or trim her eye brows. These practises only added to the racism she endured.

University a Place of Shelter and Education

At Georgia State University, Liliana felt freedom and equality amongst her peers. It was in Liliana’s nature to travel and volunteer. To date, she has visited 22 countries in Africa, Asia, Australia and Central and South America.

Travelling was dedicated work that involved working with genocide and sex trafficking victims in Cambodia.

She has worked with torture victims and refugees in Thailand, Vietnam and Laos. Liliana is the type of person who works physically, emotionally and mentally. She is a ‘hands on’ person who has been involved in the building of houses and composting toilets. On her journeys she became concerned about food accessibility and water scarcity. Being involved in this type of work changes a person for ever. I have personally known volunteers that could not adjust to their return to first world consumerism and the apathy towards developing countries and their economic problems.

Liliana Returns to Atlantic and Activism

Liliana was upset with the gap between her state of Georgia’s rich, middle class and very poor. She noticed the plight of the homeless and lack of affordable housing. Public transportation was in need of upgrading as were the needs of the jobless and senior citizens.

One of her ventures was serving on the board of Lost-n-Found Youth, a nonprofit organization that works with homeless LGBTI youths.

At home, Bakhtiari continued her activism, advocating for underserved communities and serving on the board of Lost-n-Found Youth, a nonprofit that works with homeless LGBTI youths.

It is Liliana’s hope that if elected for public office she can make a difference to the problems that she been actively engaged in. Liliana knows that it will be challenging for her as a woman, a Muslim and a lesbian.

She states that President Trump is a direct attack of all these three things that identify her. He attacks women, Muslims and encourages the extreme right-wing evangelicals to discriminate against LGBTI persons through “religious freedom.”

I wish Liliana every success in her crusade against injustice as it affects minorities, the poor, seniors, the jobless, the homeless, Muslims and other religious minorities and lastly the LGBTI community.