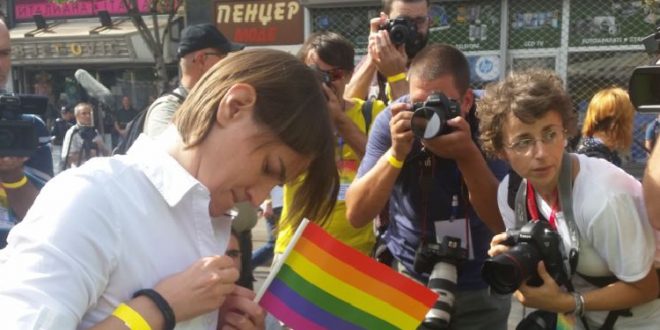 The openly-lesbian Prime Minister is the first leader to ever march in a Balkan Pride event.

In a speech on the day, she said: ‘Many criticize me.

‘As a representative of the state, I am proud that our country has adopted anti-discrimination laws.

‘The level of discrimination of minority groups and members of national communities is in decline,’ she added.

‘The answer to the expression of hatred must be something else’

In a powerful message of solidarity to Serbian LGBTI people, Ana Brnabić said: ‘After an undoubted decrease in the number of physical attacks on people who are different from the majority, it is equally important that we stop hurting ourselves with words.

‘No matter how much pain a slap in the face may cause, the weight of a word is often far more painful,’ she said.

She wrote on Instagram: ‘And you who hate and write sick comments full of hate, you are guilty.

@newslgbti
Previous Gay Marriage Facts: What you need to Know about Same Sex Marriage
Next What is FTM?