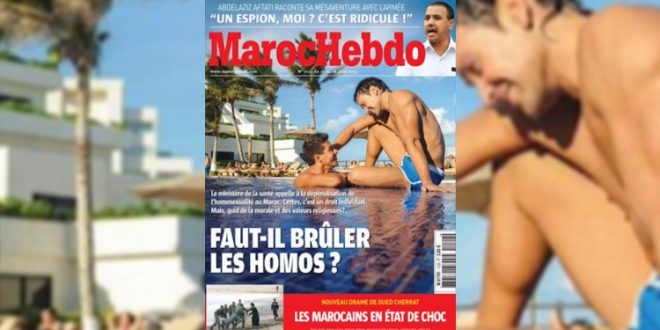 A magazine cover which asked “should gay people be burned” has been withdrawn. In view of the United Nations Charter of Rights and Freedoms – NO religion or culture has the right to take away basic human rights and these include sexual orientation. Extreme and hateful religious fanatics are portraying God as a God of wrath – instead of a God of love. These bigots use ancient texts and avoid scientific data. Paula.

A Magazine That Should Face a Law Suit?

The cover of Maroc Hebdo posed the question in response to the Moroccan Ministry of Health’s call for homosexuality to be decriminalised.

It also asked “What about moral and religious values?”

Within the magazine, which has now been withdrawn from sale, there were three articles – one which outline the situation for gay people in Morocco, an interview with pro-gay activist Abdellah Taia, and a piece by staff writer Mustapha Sehimi.

Sehimi writes: “Today, more than 70 states forbid homosexuality. In around ten of them, the sentence gay people risk death penalty.

“There is a public moral to preserve… religious values too… There is still a lot to do to strenghten human rights in Morocco so we don’t have to be misled into some dubious fight for such a marginal purpose as decriminalization of homosexuality.”

After the cover was published, many took to social media to point out that the photograph of two men featured on the magazine’s cover was actually taken at a gay-friendly hotel in Cancun.

Others simply took to Facebook to ask questions like: “Are you stupid”, and “Your covers are the worst.”

Others tweeted their distaste at the cover, calling it “criminal”, “irresponsible” and “shameful”.

In a statement Maroc Hebdo said: “Given the particularly strong reactions through social media, Morocco Hebdo decided to withdraw this issue from sale and its sites on the internet.

“It presents at the same time its apologies to all readers who were offended by this theme and it stresses it has no other requirement other than to continue to work for the expansion of a national debate on… the shape of society.”

Paula: What is there to debate? Human rights should trump any religion. The debate, since it will continue, should present the findings of most psychological and psychiatric associations world-wide. They write that homosexuality is not a disease, mental condition or PERVERSION (as stated by right wing religious zealots). They also state that homosexuality CANNOT be changed, therefore, it is NOT a choice.

If religions are to raise the soul towards heaven why do they persecute someone who is born a homosexual. This is NOT God-like. This is not loving God’s creation.

@newslgbti
Previous Transformations of the Foremost Noblewoman
Next Does Islam Support the Burning of Homosexuals?