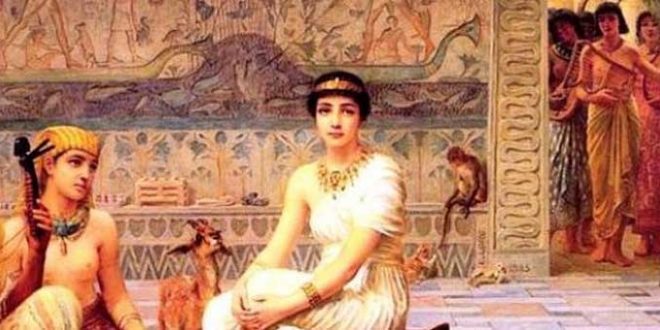 Transformations of the Foremost Noblewoman

The society of Ancient Egypt was powered by magic. Typically African in form, its primeval technique, and its contemporary practitioners, were firmly believed in by members of all classes. And magic can create transformation.

The sexual power of the monarch lay at the roots of the state’s or the sovereign’s existence, in New Kingdom Egypt as much as in any Nguni realm in the 19th century. When in residence at Waset, the capital, the pharaoh performed regular rituals in the Shrine of Amun-Re at Ipet Esut — the most select of places, which had strong sexual content.

The leading state magicians, men and women, conducted and participated in these ceremonies, which were held to be vitally necessary to the very life of the state and people. As above, so below.

The lowest stratum of agricultural labourers and poor housewives harboured their personal altars and the conviction that with the favour of the Gods and Goddesses, and the demons and spirits they controlled, their lives might be transformed.

Thus it was, through the medium of magic that the highest met the lowest in the magnificent floruit of opulence and civilisation that we call the Egyptian New Kingdom. The sovereign met the peasant, mutual submission occurred, and a tremendous effect was created. The Queen, Hatshepsut, foremost of Noble women, met Senenmut, greatest of magicians, to exchange identities and genders.

There had been queens regnant in the pa Mertneith, and Nitokert had attempted to extend their regencies into real reigns long before Hatshepsut, but their hold on affairs had been ephemeral.The pharaoh had to be a man. Certain ceremonies had to be performed that bear resemblance to those described in hushed tones by colonial investigators of Mau Mau.

So the king had to be male, and that was all there was to it. And Hatshepsut, who by the death of her husband the pharaoh, found herself in a political vacuum. High-born and used to command, she declined to see Egypt factionalised during the infancy of the male heir Tuthmosis, and took the throne. She had a plan.

She, like all Egypt, knew of the famous sorcerer Senenmut, risen from the poorest of poor families to become the most courted and feared individual in the country. Learned in every art, master of ritual ,his sharp features bore the marks of the austerities by which he had earned the keys of magic. Very early in her sole reign they were in contact, and soon it was rumoured that they were lovers. The truth is less mundane.

The queen’s great problem was legitimacy, not in practical terms — for she had strong army support –, but in magical and traditional aspects. Over monthshatshepsut of consultations with the wizard, a scheme was formed wherein Hatshepsut would appear before her father Amun, and her beloved people, in person as a man.That every part of traditional Pharaonic practice would be undertaken in the real bodily existence of Maa’ka’Re, the astral body of Re’s truth. By the magic devised by Senenmut, Hatshepsut would become Maa’ka’Re at will.

Magic needs that help of every practical aid, and such a feat as this required patient and costly preparation. For the first time known to us, a flesh suit made of byssus linen and silk thread was woven to compress the queen’s torso. It’s barely visible neckline was faithfully traced by the court sculptors on every representation of Maa’ka’Re that we have. Egyptians wore very little clothing,but elaborate headwear and jewellery, so such a technical marvel was necessary.

The Queen must have worn artifical male genitalia.This has never been directly suggested, but a moment’s thought will demonstrate it’s truth.The pharaoh had to demonstrate his potency in the sanctum of Amun-Re, whose image was ithyphallic.That is to say, Amun of Thebes has an erection, and the monarch must also display one in his identification with the supreme deity.

To this end, encouragement was sometimes offered by the chantresses of the God, who were all pretty women, and who participated in the service.The fragmentary representations of these rituals are extant, scattered around the immense Karnak ruin-field in modern Luxor.

The Egyptians were not content with forms of words, there had to be actualities, or the people high and low would not believe.This is another link with modern Africa.

Hatshepsut the kingThere had also to be a temple of transformation, wherein the queen would transform into the king before proceeding to Karnak, and where Maa’ka’Re might transform back again into Hatshepsut. To this end Senenmut designed and built Djeser-Djeseru, the Holiest of Holies, wherein to work the divine mystery of gender transmutation.The aid of the goddess of sex being obviously vital in this matter, the temple was built against, and partially inside, Hathor’s sacred mountain, on an axis directly aligned to the sanctum sanctorum at Karnak, from which it was plainly visible.

It is my contention that when Hatshepsut became a man, Senenmut became a woman. His very name is suggestive, for those with ears to hear. Sn is a causative particle, n is a copula, and Mut is the primordial mother in the Theban triad. So the magician used the formula of his own name, and became both the universal mother, and the mother of himself.

His block statues, unique in Egyptian art, with the head of the girl child Nefrure projecting from his lap are an epitome of man as mother, the girl being the magical child of Senemut and Hatshepsut the queen, or was the conception between Maa’ka’Re and Senmutet?

Whatever the exact mechanics, the overall project was a complete success. Maa’ka’Re was accepted as Pharaoh of Egypt and was crowned as such, the first woman ever to assume the supreme power in prescribed form. Not that she would have thought of herself, at the moment of her coronation, as a woman at all. By the arts of Egyptian magic she was a man, a king, in reality.

The people applauded, feasted, and were not shocked. Every Egyptian knew that sorcerers could assume the forms of birds and animals, and could possess other persons bodies and identities, so what could the greatest magician of Egypt, and the most powerful political figure,not achieve?

The Pharaoh soon became the richest individual in the known world, by an adroit combination of massive trading voyages to Africa, the valleys of incense, the terraces of turquoise, and the complete avoidance of unnecessary and costly warfare. She kept up her army, though, using it as a border guard, a police force, and a covering force for her business activities.

The country at large, buoyed by lavish state funds, knew boundless prosperity ,good Niles, no plagues, and regular festivities. So all was well-for a while.

Of Senenmut’s fall, Maa’ka’Re’/Hatshepsut’s decline into obesity, the gradual rise of faction around the young prince Thutmosis, I shall not here speak. I simply present the grand entrance of transgenderism on to the world’s stage in all it’s ancient glory.