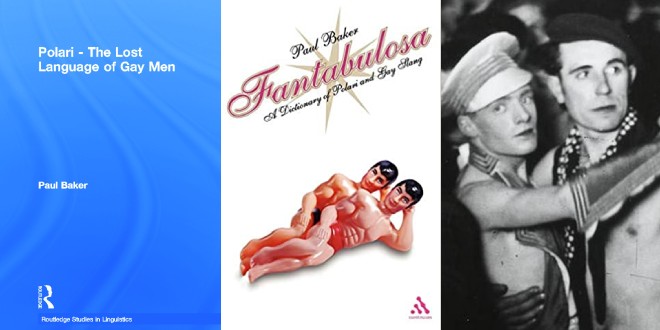 When homosexuality was illegal up until 1967 the Gay Community had to use own language.

Since LGBTI+ people have recently been able to exist more openly in society without fear of persecution by the state we have been able to talk openly about express our feelings and personalities in public. But this has not always been the case. Homosexuality was driven so far underground in the United Kingdom that many turned to a new, secretive yet expressive form of communication.

Polari first came about in the theatre and the gay subculture in Britain in the 1950s and 1960s, becoming more widely known from its hidden use by camp radio characters in a popular BBC radio show which ran from 1964 to 1969. It grew up primarily to disguise homosexual activity from potentially hostile outsiders (such as undercover policemen), but also because many gay men worked in entertainment (including circuses, hence the many borrowings from Romany in Polari). It was also used extensively in the Merchant Navy, where many gay men joined cruise ships (particularly P&O) as waiters, stewards and entertainers. It was mainly used by camp or effeminate gay men, who tended to come from working class backgrounds. In a sense, they had the least to lose by being “out”.

Polari had begun to fall into disuse by the late 1960s, the popularity of Julian and Sandy ensured that this secret language was public property, and the gay liberationists of the 1970s viewed it as rather degrading, divisive and politically incorrect (a lot of it was used to gossip about or criticise people, as well as discussing sexual exploits). Since the mid-1990s, with the redistribution of tapes and CDs of Round the Horne and increasing academic interest, Polari was undergone a slight revival. It will probably never die out completely, but new words are continually being invented and updated to refer to more recent cultural concepts – for example, the recent term “Madonna claw” means an old withered hand. In 2002 two books on Polari were published, Polari: The Lost Language of Gay Men, and Fantabulosa: A Dictionary of Polari and Gay Slang (both by Paul Baker).