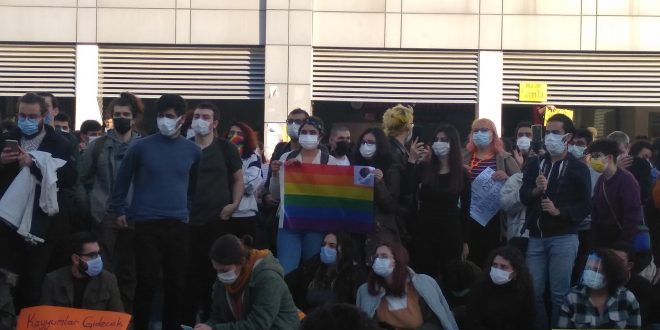 Students of Istanbul’s Bogazici University defied President Recep Tayyip Erdoğan’s appointment of Melih Bulu as their school’s rector for a third day in a row, accompanied by more police officers than the previous demonstrations. Students marched to the ferry docks after a protest on campus, crossed the Bosphorus and joined a crowd of hundreds more in Kadıköy.

Melih Bulu was appointed rector on January 1 by President Recep Tayyip Erdogan and is a member of his ruling Justice and Development Party, AKP. He was rector of Halic University in Istanbul before assuming his new post.

“We do not want an appointed rector. Melih Bulu is not our rector,” student representatives said in a press statement, demanded his resignation and that of other politically appointed rectors.

“It is not a crime if a rector has a political identity,” Omer Celik, the spokesperson of the AKP, told a press conference on Tuesday.

The first protest, on Monday, was held at the Bogazici University campus. Dozens of students were detained during and after the protest by police.