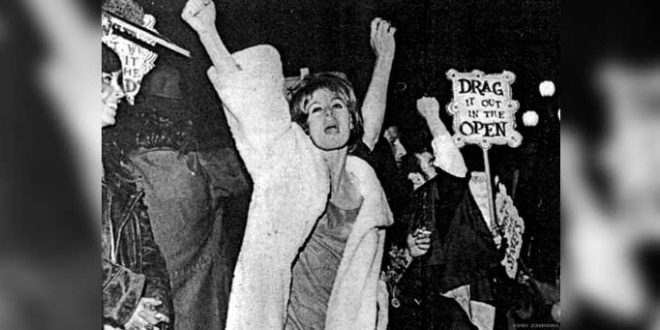 When discussing historical events that impacted the transgender community, the first one that usually comes to mind is the Stonewall Riot: NYC, 1969. Started by a small group of trans women, it has long been considered to be the birth of the gay-rights movement.

However, in conducting research regarding Stonewall, I stumbled across a photo that guided me to another, lesser known riot — preceding Stonewall — referred to The Compton Riot, that occured in San Francisco in 1966. This piece of history resonated with me; it focused on the transgendered community, and the magnitude of the despair the “Queens” endured each day while living in the Tenderloin [area of San Francisco], and their victories that followed.

Gene Compton’s was an all night restaurant located in the Tenderloin district of San Francisco. This was a district frequented by all members of the homosexual community and included the “Drag Queens”. The term Transsexual was first used by Dr. Harry Benjamin in his book The Transsexual Phenomenon. Until it became more popular, transsexual and transgendered women (in particular) were lumped in with the homosexual community as Drag Queens, or transvestites, though within the community just referred to as “queens.”

Compton’s, located on the corner of Turk and Taylor, was the major hangout for the queens in the 1960s. Prior to the riot, the life of a Queen was usually in the clubs as alternative dancers or on the streets as prostitutes. The police gave the transgendered community the sense that they belonged in the Tenderloin and could not leave. Through the interview process, it was easy to learn that these ladies could not obtain or hold regular paying jobs in many cases.

Even the ones who worked as dancers did so because the bar owner had friends on the force. One such entertainer was Aleshia Brevard, who is interviewed for the documentary,who did go on to some mainstream success as an actress, and the author of “The Woman I was Not Born To Be: A Transsexual Journey.”

There was a lot of corruption in the district. In 1966, “impersonating a woman” was a criminal offense. Since most jobs required an ID, and since transgendered women were not legal, it was obvious that any work these girls did, they probably did outside of what was considered “honest work” at the time. On a regular basis these women would be picked up by the cops and forced to spend — in some cases — days in lockup. For instance, one woman spent 60 days in the hole because she would not let the cops shave her head. It was a mutual feeling that the cops were out to get the ladies, and this fueled a growing mistrust in the authority figures of the time.

It is important to remember that the Civil Rights movement was in full swing in 1966. For the most part, the movement was more about race, but from 1966 to 69, sexual minorities also began to speak up. Until this point, in the Tenderloin, the transgendered women were largely unorganized. There was no leadership, no guidance and nobody willing to step up and say “enough”. That changed when an organization known as the Vanguard began to grow in popularity and numbers. Vanguard was not accepted by everyone in the Transgendered community and was made up largely of hustlers and drag queens. Compton’s diner was a regular meeting point for members of this new “club.”

However, management of Compton’s didn’t like this new attitude being displayed by the Vanguard members, and that — considered by many — is what really lit the fuse to the Compton Riot.

The Compton management would not allow these Vanguard members to frequent the diner, but by this point, members of the Vanguard were fed up; they wanted their rights. One interviewer notes that they were tired of being forced into the men’s room when they were dressed as a woman. They were being kicked out of Compton’s regularly, and felt that they were not being treated fairly. So, they picketed in front of Compton’s on July 18th.

This was their first major political action, but it failed to achieve its goals.

On the night of the riot, some felt that the cops were there to raid Compton’s to begin with–that it was a setup. The spark occurs when a police officer grabbed one of the Queens by the arm and she threw her coffee in his face. That’s when all hell broke loose. Tables were turned over; windows were shattered with sugar shakers, drag queens took to shoes and purses.

Can you imagine a scene where drag queens are beating cops with purses? It almost seems like right out of a Mel Brooks movie, and, would have been funny if it wasn’t so real. The cops retreated for backup, but those in the restaurant wouldn’t let up. They poured into the streets and kept fighting.

Then the patty wagons showed up and people were fighting and being arrested. Before it was over, a police car was destroyed, and a newsstand set ablaze, and attitudes would change forever in the Tenderloin.

To quote Dr Stryker, director of Screaming Queens: Riot at Compton’s Cafeteria, a documentary of the event, ”It was the first known instance of collective militant queer resistance to police harassment in US History.”

A lot of folks went to jail, but in the end it resulted in freedom and joy. The transgendered women would try on clothes freely in shops. They could dress like women all the time. To quote an interviewee, they didn’t have to be “Hair Fairies” anymore. What was “inside” could freely be expressed publicly. They were liberated.

From that point on, life for the transgendered changed. They even garnered an unlikely advocate in Police Sergeant Elliot Blackstone: an important figure in the human rights movement for Transgendered women in the San Francisco area. He believed that if “people wanted to be left alone, that they had the right to be left alone.”

Another key figure who emerged after the riot was Dr. Joel Forte — who created the “Center for Special Problems.” It may seem like a poorly labeled office, but it introduced ground-breaking initiatives: One benefit from this center was to create special ID cards for the transgendered community, which in turn allowed them to obtain regular paying jobs.

If you watch the Screaming Queens documentary, one such card shows that a person was “UNDER THE TREATMENT AT THE CENTER FOR SPECIAL PROBLEMS FOR TRANSSEXUALISM.” Clearly society has come a long way since then. But this was important and unprecedented at the time; a new path forward when none existed prior; it was new opportunity and a sense of renewed hopes.

It becomes obvious after understanding what happened in the Tenderloin how and why the Queens finally organized and stood up for their rights to be women. They experienced many victories during the years tha followed. And most recently , during the past five to ten years, there has been leaps forwards in the rights of transgender people, where they are now allowed to be the men and women they always knew they were from the start.

I intend to do follow-up articles from this event, highlighting some of the folks mentioned, and provide biographies of what they contributed to this movement, and beyond.

NOTES: Susan Stryker uncovered the story while doing research at the Gay and Lesbian Historical Society, and then directed the documentary “Screaming Queens: The Riot at Compton’s Cafeteria,” the source from which I gleaned much of the information I listed here.

Susan received her PhD in History, and in the documentary pieces together the story, as well as the cause and effect of events that led to the riot.