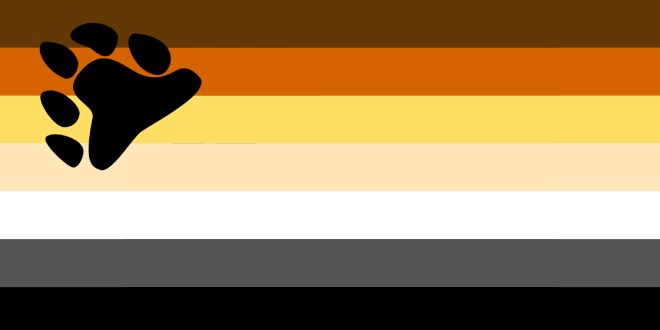 What is a Bear?

Q: What is a Bear?
A: The most common definition of a “bear” is a man who is hairy, has facial hair, and a cuddly body. However, the word “Bear” means many things to different people, even within the bear movement. Many men who do not have one or all of these characteristics define themselves as bears, making the term a very loose one. Suffice it to say, “bear” is often defined as more of an attitude than anything else – a sense of comfort with our natural masculinity and bodies that is not slavish to the vogues of male attractiveness that is so common in gay circles and the culture at large.

Q: What is a Cub? Daddy? Otter? Wolf?
A: These are subclasses of “bear”. A “cub” is a younger, perhaps smaller, less experienced bear, sometimes interpreted as a bottom sexually. Conversely, a “daddy” is an older, more mature bear, usually a top sexually. “Otters” and “wolves” are thin bears, the “wolf” being more aggressive.

Q: What is the Bear Flag?

A: There are many bear flags, by far the most popular is the International Bear Brotherhood Flag. This flag is Copyright © 1995 by Craig Byrnes. The colors represent the fur colors and nationalities of bears throughout the world and it was designed with inclusivity in mind. Craig allows individuals and clubs to freely use the flag for non-commercial purposes.

Previous Transgender Ban Lifted in The US Military
Next Homeless Shelter for LGBTI+ Opened in Naples, Italy