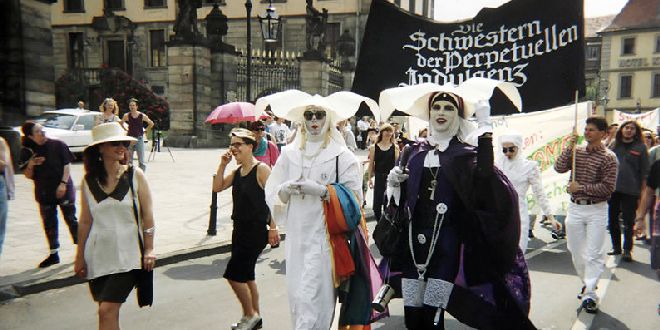 The Sisters of Perpetual Indulgence

The Sisters of Perpetual Indulgence are a colourful and distinctive charity, protest, and street performance organization of Queer Nuns who fight sexual intolerance with drag and religious imagery. They also satirize gender and morality issues.

The movement started in 1979 when a group of gay men in San Francisco began wearing habits in visible situations to draw attention to social conflicts and problems in the Castro District. The original three men procured habits from a convent in Iowa pretending to be putting on a a performance of The Sound of Music!

They are an international organisation, and there are around 600 Nuns in Australia, Canada, Colombia, France, Germany, Scotland, Switzerland, the United Kingdom, and Uruguay.

It was a time when religious participation in politics was growing, and Anita Bryant and Jerry Falwell were crusading against the acceptance of the gay life style. The Castro District as a major gay neighborhood was targeted by several dozen church members who took to its streets to preach about the immorality of homosexuality.

The name of the group became familiar in 1980. The nuns held their first fundraiser, and a write-up in The San Francisco Chronicle by Herb Caen printed their organization name, the Sisters of Perpetual Indulgence. The benefit was for San Francisco’s Metropolitan Community Church Cuban Refugee Program.

The community was then hit with the AIDS crisis and the Nuns played a major part in organising awareness, and are thought to have produced the world’s very first Aids awareness literature.

Members of the Sisters of Perpetual Indulgence who have died are referred by the Sisters as “Nuns of the Above”.