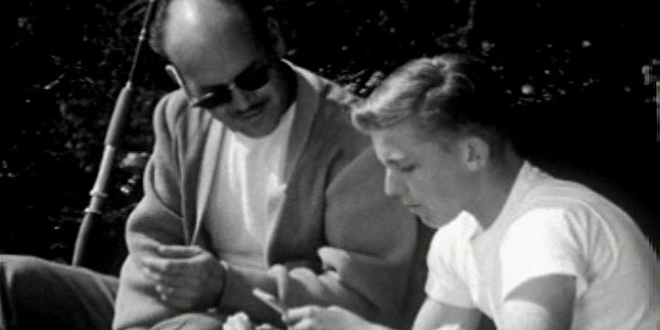 Sometimes retro can be fun. It can be amusing to laugh at the idiotic opinions of our forebears. We can see how far we’ve come and take some kind of comfort in mocking the prejudices of yesteryear.

On the other hand we can watch Boys Beware (1961) and consider the fact that its attitudes are still held by many, and recall that it wasn’t that long ago that it was made.

1961 might seem like another era, but Boys Beware was still doing the rounds in the 1970s, and was both colorised and remade.

There are some hideous presumptions made in the film. What went on in that hotel room? The homosexual was arrested and Jimmy, in an act of what can only be called victim-blaming, is put on probation.

The next homosexual in the film is a murderer, who simply likes killing young men.

Boys Beware equates homosexuals with child molesters and pedophiles, repeatedly describing homosexuality as a mental illness. True to the stereotypes of its time, the gay men in the film have moustaches, sunglasses and/or bow ties.

Shot in 1961 Boys Beware was shot in the Los Angeles suburb of Inglewood, California and produced with the cooperation of the city’s police department and the Inglewood Unified School District, is narrated by a police detective who is on his way to a school meeting to discuss the issue of sexual predators that attempt to lure young adolescent males.

It not only shows basic misunderstandings about homosexuality but also attempts to prejudice the community against homosexuals who are portrayed as predatory at best, and basically as anti-social and evil.