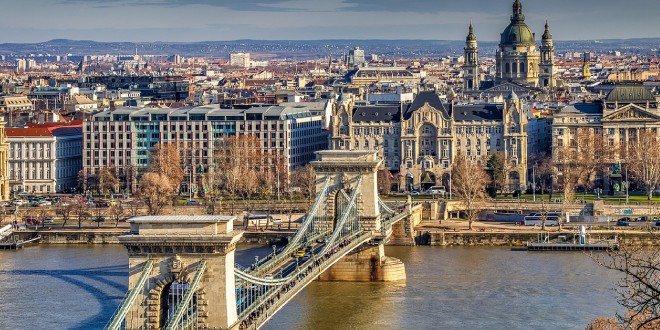 Hungary was of course part of the old soviet bloc but now Budapest its capital is vying for the title of the leading city of Eastern Europe and a visitor can feel “post-communist-now-European” euphoria is breaking out and the boom has just begun. The city is ideal for a weekend break as it is easy to get there and it is richer in local colour than Prague and because there are few budget flights if any then you are guaranteed to be rubbing shoulder with the Hungarians, ot perhaps sharing a thermal swimming bath with them.

Architectually Budapest is a place of weird and truly wonderful juxtapositions. The ancient towns of Buda and Pest were united in 1873 but the city still remains in two parts – Buda on the craggy hills topped by the medieval ramparts and old town and Pest with its grand Imperial squares and avenues. The latter is packed with pubs, bars, restaurants and clubs and the young Hungarians enjoying themed pubs, riverside restaurant, street parties and trying to improve their English.

Things to do in Budapest uinclude exploring the ancient town on Castle Hill and Look at the Royal Palace. From here you can take the aged funicular down to the Danube. The northernmost Muslim holy site in Europe is Gul Baba’s Tomb set in a lovely Islamic style garden overlooking the Danube and with views over Pest. South of the city is Statue Park with lots of old communist era statues striking redundant revolutionary poses. The forbidding old lady in the kiosk will sell you Soviet-style T-shirts and toy Trabants. The Lizt Academy has recitals every Saturday at 11am and the building is a museum as it was the place where Lizt spent the last five years of his life. There are also steam rooms and saunas and mixed steam bathing pools.