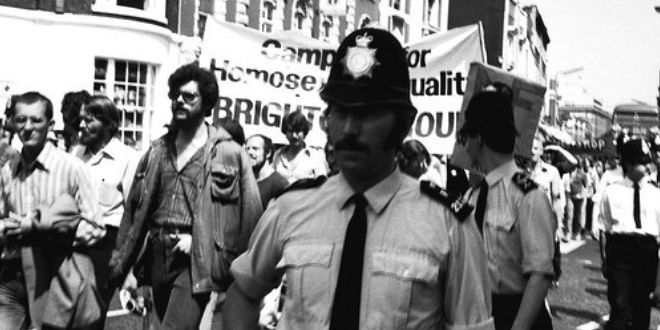 Protests at the Gay News trial

In June 1976 the British gay newspaper Gay News published a poem, The love that dares not speak its name, by James Kirkup. Someone sent a copy to television campaigner Mary Whitehouse. She applied for a private prosecution for blasphemy in November and the prosecution began in December 1976. Gay News Ltd and Denis Lemon (the editor) were charged. The offending publication was “a blasphemous libel concerning the Christian religion, namely an obscene poem and illustration vilifying Christ in his life and in his crucifixion”.

He published Kirkup’s poem in 1976 because he thought ‘the message and intention of the poem was to celebrate the absolute universality of God’s love’, although he admitted it was ‘probably not a great work of literature’.

A fighting fund to defend the newspaper was set up. On 4 July 1977 proceedings opened at the Old Bailey. Margaret Drabble and Bernard Levin were allowed to appear as character witnesses on Lemon’s part. On 11 July Lemon and Gay News were found guilty. Gay News Ltd was fined £1,000. Denis Lemon was fined £500 and sentenced to nine months imprisonment, suspended. Costs of £7,763 were ordered.

Gay News and Lemon appealed. On 21 February 1979 the Law Lords upheld the verdict. On 7 May 1982 The European Court of Human Rights decided the case was inadmissible.