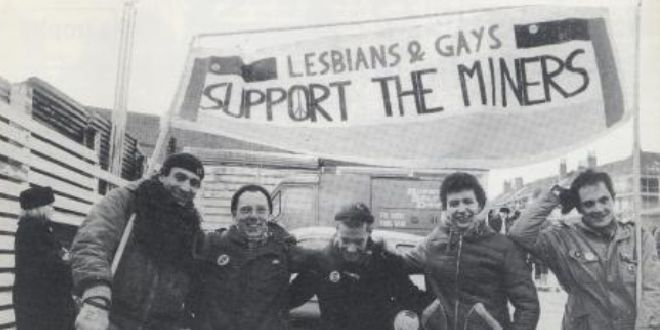 The Lesbian and Gay Miners’ Support Group were set up during the 1984-85 miners’ strike and challenged prejudices held by many in the labour movement.

by February 1985 there were eleven lesbians’ and gay men’s miners’ support groups all over the country. By December 1984 the London group alone had collected over £11,000 through pub, club and street collections, benefits, parties and other events. The highlight event was undoubtedly the ‘Pits and Perverts’ gig at the Electric Ballroom where Bronski Beat headed the bill; it raised £5,650.

The London group was the first to be set up in July 1984, and started with 11 members. Six months later it had grown to 50 members.

The Lothian Lesbian & Gay Miners Support Group was set up in September 1984 with 12 members raising £40 a week for the White Craige strike centre in East Lothian.

Lesbians Against Pit Closures followed in November 1984, involving more than 20 women who collected £50 a week for the Rhodisia Women’s Action Group, Worksop. The gay community’s support for the miners received much coverage in the left-wing and trade union press. The lesbians’ and gay men’s ‘fringe meeting’ at the October 1984 Labour Party conference was attended by about 250 people.

The recognition of gay rights issues by the union and Labour movements and the contacts forged during the miner’s strike between them and the gay movement led to the formation of a network of gay groups for the members of trade unions which continues to thrive. It also led to gay and lesbian issues being included in training courses for union representatives in the workplace, and the adoption of gay rights policies by the Labour Party.