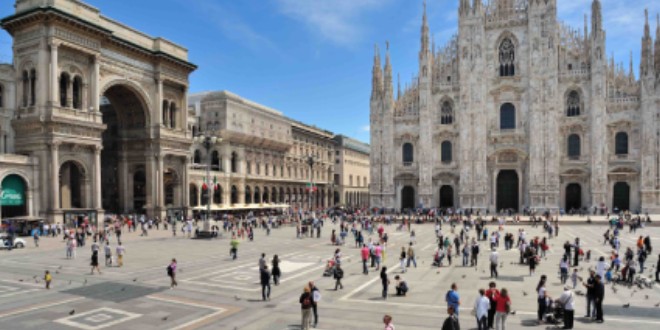 Milan may not have the immediate allure of such Italian cities as Venice, Rome and Naples, but it is a city of immense sophistication with some magnificent buildings, wonderful squares, old streets and not least the magnificent cathedral or Duomo – the third largest in the world. Milan is also the heart of the Italian fashion business, and it looks the part – while other cities have a fashion week Milan has a fashion year, every year. Even the policemen look as if they have just come from a fashion shoot for vogue.

On the main square sits the huge Duomo recently covered in scaffolding and plastic but now looking like some elaborate gothic wedding cake. It’s worth going onto the rooftop for a view of the city (although a trip to the little-known thirties metal tower the Torre Branca for a private view of the city will miss the masses.) It is great to sit at one of the many cafes in the main piazza sipping a beer under the shadow of the Duomo watching the crowds and tourists. Just off the main square is also the spectacular Galleria Vittorio Emanule II a towering 19th century glass edifice in the form of a cross with some of the smartest shops and most expensive coffee shops in Milan. Standing dead centre of the cross and looking upwards to the glass dome 200 above your head is a dizzying experience.

Do have a look at the finest opera house in the world, La Scala, just off the main square and visit the museum Pinotec de Brera a few minutes walk away. This exquisite old villa contains a stunning collection of early to late renaissance paintings including a staggeringly beautiful Piero della Francesca Actually only minutes away is a small park, I Giardini Publici, where a beer and a cigarette is a welcome respite after the gallery. The world famous Last Supper (or what’s left of it) is to be seen in the refectory of Sants Maria delle Grazie and  buying a ticket in advance to avoid the queues.

For those who have a little time in the city an out of town visit to the lakes is a good way to spend the day. Como is only forty minutes away by fast train and from there you can take a boat trip to a lakeside village for lunch. Idyllic. There is a lot of gay life in Milan and the Italians are friendly enough. Pick up a map of Gay Milan to locate the various areas with a concentration of gay businesses. In short there are a lot around the incredible main railway station (built in the grand fascist style on the orders of Mussolini) in the streets on the right as you face the station. If you walk along the left side of the station you soon come to a great gay restaurant next to a few bars and discos with a sauna just around the corner however remember though, that at night the piazza in front of the station is occupied by the homeless and drug dealers so a little care is called for. Further gay establishments can be found just over the other side of the main square.