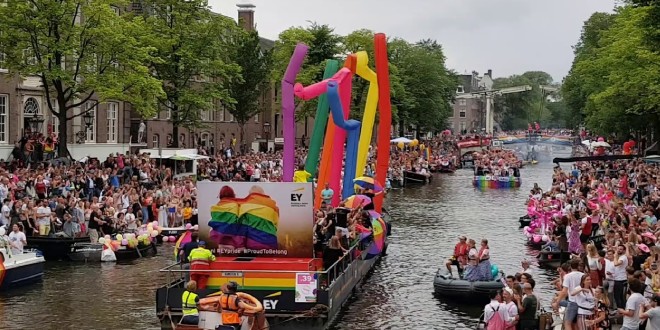 Amsterdam is no doubt the most easy-going city in Europe. The Dutch have traditionally always been a laid back tolerant race indeed they actually legalized homosexuality as long a go as 1811 and Amsterdam epitomizes this Dutch spirit. Blessed with a circular layout which means that getting from place to place can either be reasonably quick or relatively leisurely if you go the scenic route following the arcs of the canals. A trip on the canals is a must.

If you are interested in art and museums then Amsterdam has a wealth of goodies to offer you from the world-famous museums Van Gogh, Rijks , Stedelijk Museums to the Sex Museum, Rembrandt’s House (a must see), the Heineken Museum, the Anne Frank House, and the Frans Hals Museum in nearby Haarlem (about twenty minutes by train).

The main claim to fame of the city, like Venice, is its network of canals. Whilst unlike Venice Amsterdam has roads, the canals and the cute little (and not so little) houses and house-boats give the city a wonderful charm that on a fine spring day as the many trees begin to blossom is unbearably Apart from the museums, there are other things to attract the visitor. The two main parks are big, the Vondel Park next to the Rijks Museum is long and wide and can be very noisy at weekends with bongo players, chanting hippies, rollerbladers and skateboarders but on some days when all is quiet it is a haven with its lakes and weeping willows and fishermen puffin on their pipes. This park also has music festivals, pop concerts and film screenings. The Oosterpark is smaller but is a very pretty open space with a sinuous lake. There are a number of offbeat museums here – Children’s Museum, WW2 Museum, Boat Museum, Science Museum and so on.

Although by international city standards Amsterdam center is compact there are four gay villages loosely connected. The first is around the area in front of the station very close to the second an intense concentration of pubs, bars , shops and clubs in the heart of the old town, also known as the red light district, centred on the Oude Kerk. Most of the leather shops and clubs are in this area. About twenty minutes walk south from this area, after crossing the main canal, The Amstel, (tempting to take a few mouthfuls with that name – best not to), you arrive at the historic Rembrandtplein. There are many little streets around here with bars and pubs to suit every taste and Reguliersdwarsstraat is a good bet for a daytime drink or discoing until four at Exit. The fourth gaggle of gaiety is on the left off Spiegelgracht as you face the Rijks Museum.

The range and number of gay places are enormous. Whatever you are looking for you can find and since the place is so easy going (you could get married there) life can be really lovely. The Dutch themselves are also very pleasant. Go there as soon as possible!

Further Reading: Highly recommended is Out Around – Amsterdam by Ryan Levitt, published by Thomas Cook Publishing at 7.99. At a manageable 160 pages the guide is crammed full with up to date info plus lots of maps and colour piccies. It also has a “My Top…” feature where the author nominates his favourite bar club, sauna and so on. It is compact so easy to carry around.