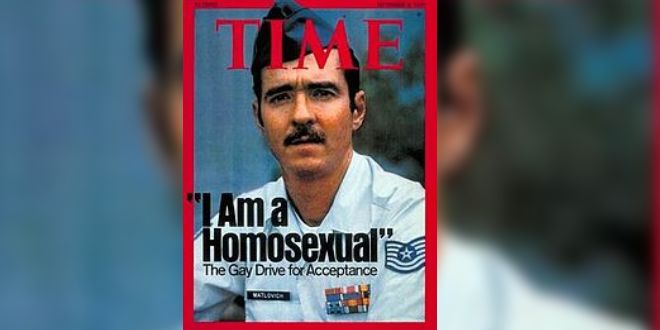 Leonard P. Matlovich was born on July 6, 1943 and died on June 22, 1988. He was a Vietnam War veteran, race relations instructor, and recipient of the Purple Heart and the Bronze Star. Matlovich made history by becoming the first gay service member of US forces to out himself to the military to fight their ban on gays. In the 1970s he and Harvey Milk were the best known gay men in America.

The gay community rallied behind his fight to stay in the USAF. His photograph appeared on the cover of the September 8, 1975, issue of Time magazine, making him a symbol for thousands of gay and lesbian servicemembers and gay people generally. Matlovich was the first openly gay person to appear on the cover of a U.S. newsmagazine.

In October 2006, Matlovich was honoured as a leader in the history of the LGBT community .

A Mormon and church elder, Matlovich found himself at odds with the church, and their opposition to homosexual behavior. He was twice excommunicated by The Church of Jesus Christ of Latter-day Saints for homosexual acts.

In 1986 Matlovich was diagnosed with HIV/Aids. Typical of the man, he was among the first patients to try a newly developed treatment, AZT.

His grave at the Congressional Cemetery does not prominently bear his name. The inscription reads: “When I was in the military, they gave me a medal for killing two men and a discharge for loving one.” His grave is in the same row as that of FBI Director J. Edgar Hoover.

Previous Bisexual Women Have Higher Rates of Depression
Next Lambda