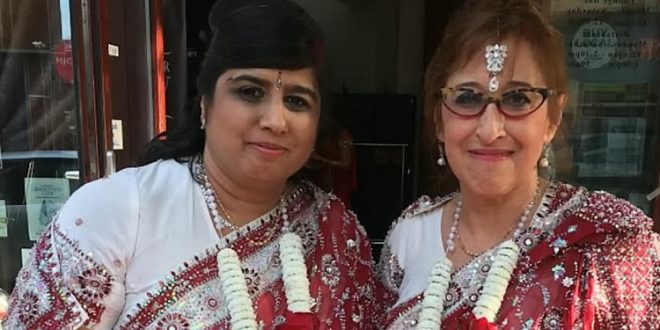 The marriage is believed to be the first female same-sex Hindu wedding to take place in Leicester, U.K. between Miriam Jefferson and Kalavati Mistry. It was a colourful ceremony as both wore traditional red and white Hindu wedding colours.

They also wore floral garlands and ‘mangala sutra’, which is a necklace traditionally tied around the bride’s neck to show she is now married.

Kalavati is from Leicester while Miriam is a native of Texas, U.S.A Kalavati grew up in a traditional Hindu household. She came out to her family and wanted an Hindu wedding.

Miriam met Kalvati in the year 2000 while when the English woman came to America for working purposes.

One Wedding is NOT Enough!

Miriam grew up in a Jewish household. Earlier in 2017, both women had a Jewish wedding in San Antonio, Texas. This is the home town of Miriam.

Love is the foundation of all religions, and both women have found this gift in their life together.

@newslgbti
Previous 7 Things Every Gay Should Take On A Date
Next Gay Movies, DVD Films and Videos