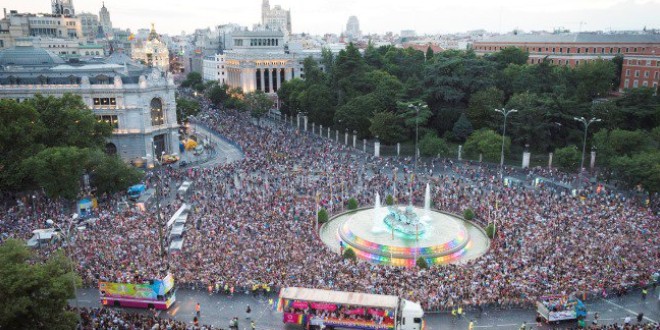 While there is an amazing LGBTI+ scene in Madrid all year round, there is one undisputed highlight on the calendar. The annual Gay Pride event is the biggest of its kind in Europe and regularly attracts upwards of 2 million people.

Just imagine! It’s an incredible sensation just being there.  Madrid Gay Pride takes place normally for about 10 days over the summer.

A varied schedule attracts people of all sexualities and from all walks of life.

It is easily one of the biggest fiestas in Spain in its own right and although it is mostly centred in and around Chueca, the whole central area of the city feels like a massive party when Madrid Gay Pride is on.

Festivities include free concerts which are held in Chueca’s squares and also bigger ones such Callao and Plaza de Espana. There are various unusual and often comical activities such as the stiletto race known as La Carrera de Tacones. If you need to cool off there’s several pools around the city which are popular with Madrid’s gay community. One of the best is El Lago, which is found on the edge of the Casa de Campo, a giant nature park which takes up most of the Western part of town.

At night, Chueca’s bars and nightclubs are still very much open for business but inevitably they tend to be hugely busy when the Pride event is on. However there is hardly any need to go to a bar when there the streets are so lively and the hot summer nights ensure few people go home early. During Madrid Gay Pride, no matter what hour it is, you’ll always find some form of entertainment.

The most political part of the event involves a march along Gran Via, the cities widest avenue which dissects the heart of the city. The march finishes in Plaza de Espana and attracts LGBTI+ groups from all over Spain who come to primarily to celebrate but also to demonstrate on various issues.

The event seems to get bigger every year. In 2007 Madrid hosted one of the most successful ever Europride festivals which really propelled the city into one of the top gay travel destinations in the world. Its reputation is now firmly established and the city continues to influence LGBTI+ communities around the world.