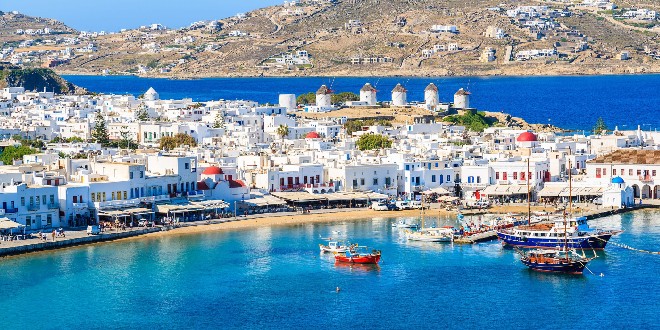 Mykonos Island, is part of the Cyclades island group in the Aegean Sea. Located between Syros, Tinos, Naxos and Paros. The island spans an area of 85.5 square kilometers and rises to an elevation of 341 meters at its highest point. There are about 10,200 permanent inhabitants (ref: 2011 census) and divided at two big cities. The main city of Mykonos, is called ‘Chora’ and had given its name to the island. It is located in the west coast of the island and include the public services, the banks, the restaurants and the bars. The Second big city, is called ‘Ano Mera’ and is located in the middle of the island.

There are not a lot of business there, but is famous about its traditional taverns. Mykonos in general, is one of the most popular and glamorous Greek islands, known for its nonstop party atmosphere.

The Winds
There are two seasonal winds in Mykonos. Sirocco & Meltemi. Sirocco, is the famous southern wind, carries sands from the deserts that border the Mediterranean. In winter arrives from the south and is sometimes accompanied by electrical storms. More famous is the Meltemi. is a cooling wind , that comes from the north, during July and August.

The Beaches
Mykonos has a lot of beautiful, golden and sandy beaches with transparent waters.

Of course, to visit the beaches , you should Book Car in Mykonos, because all of them (except Megali Ammos), are far away from Mykonos Town.

Mykonos is well known for its vibrant nightlife and for being a absolute gay-friendly destination. A island very loved from the LGBTI community.

Here you can find a list of the most famous and crewed Gay Bars  and Gay Clubs in Mykonos.

Gay Beaches in Mykonos
Mykonos owns some of the most famous Gay Beaches worldwide. Here i have a few, but for sure if you try to explore the island, you will discover more.

Elia Beach
You drive on the main road for Ano Mera village, and after Ano Mera, you turn Right. Not the first road on the left (this go to Kalo Livadi), but the second road on left, guide you at Elia Beach. Organized Beach, with umbrellas & chairs. Has also beach service for drinks and coffees. Near you can find a Restaurant and a small beach bar.