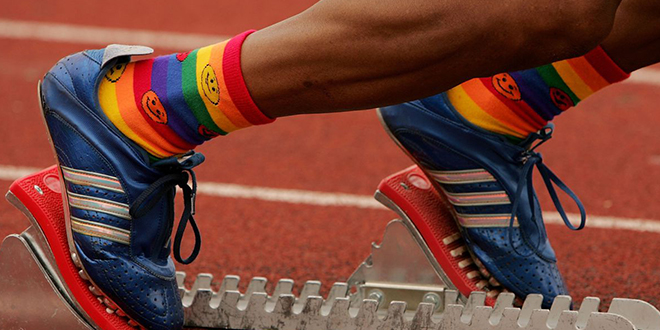 Hot, steamy days in the upper deck. Beer swigged. Sleeveless T-shirts, biceps showing. The grunt of a pack of men in a football scrimmage on a late fall afternoon. The resigned and disappointed look on a rookie’s face when he realizes he’s been cut. Coaches named “Stud”. Cotton clothing for golf, rough wool for football. Cigars in the clubhouse. Taped ankles, buzz cuts, and the crunch of cleats in a sand-covered dugout.

Admit it: these mainstay tools of contemporary sports cinema have a whole lot more potent effect on us than they do straight men. And I hate to assume, but I can’t see my old college roommate feeling the same way as I did when Rudy couldn’t get a break, or hit the lows I hit when Roy Hobbs re-aggravated his decades-old gunshot injury. While 90% of guys might not notice, the other 10% find such masculine drama, well, “inspiring.”

So if a gay male sees more to a sports film, then which make the grade? What are the top sports flicks for the minority of us who can’t bear to watch Ollie’s foul shots in “Hoosiers” because we can’t reach into the screen to console the guy should he miss? Here are the most watchable sports movies for sports fans who, to borrow a phrase, “see a different game.”

10. “The Endless Summer” (1966). Ever felt totally out of your element but enjoyed what you were experiencing so much that the fascination stuck? That’s what happens here, unless this pseudo-documentary travelogue flick from the “Gidget” era happens to read like an autobiography. For the rest of the world, surf lingo, tactics, and sites remain a mystery, which is why this 34-year old film still pleases. An incredibly masculine, violently thrilling joyride around the world in search of the “perfect wave” with a team of bad boys from surfing’s golden age, “Endless Summer” begs the inevitable question: whatever happened to surfer fetishists?

9. “Tin Cup” (1996). At first glance, this is nothing more than “Bull Durham” on the links, a middle-of-the-road romantic comedy full of flirtatious one-liners between Kevin Costner and Rene Russo, hardly worth a mention for its relative absence of steam. But in a laid-back, witty way, this movie hits the heart, no matter the avalanche of corny straight-guy schmooze techniques and relatively inane script. A “date movie” if there ever was one, “Tin Cup” benefits from a weird, indescribable aura that surrounds every scene: the characters sweat, the sun is blinding, the landscape bakes. It’s a summer flick, and if you’ve ever played golf it’s a thriller, and it contains the most handsome, most loveable incarnation of Costner on film (for my money, anyway). Few times did I manage to escape its relatively oddball charms.

8.. “8 Seconds” (1994). There isn’t a man alive (that I’d identify with, anyway) who would pass up a chance to ride in Lane, Tuff, and Cody’s Caddy, across miles of deserted nothingness in search of a dream, listening to Cody’s cowboy poems, and feeling what it’s like to be a free man. Of course, what makes a rodeo man tick is the secret stuff of legend, but here’s a good peek inside, a highly underrated film with a surprisingly well-paced and patient performance by Luke Perry. He makes a great Lane Frost, right up to his tragic death, and you can’t help but feel it was somehow destined to end up that way. All the stud cowboy posturing aside (and there’s plenty of it), “8 Seconds” is a melancholy film about the things that drive each of us to chase a dream, and how we sometimes lose ourselves along the way. Highly recommended, not just for the boot set.

7. “Hoosiers” (1986). Time has not been kind to this much-revered Cinderella story of the smallest-town-makes-good Indiana state basketball champs of 1952. The warm, entertaining story I remember from years ago now seems so forced, the drama so painted, and the subplots ridiculously trite. The soundtrack humorously reminds me of the sort of melodramatic dreck that served as “tension-building” background noise for bad 1980s dramas like “Dallas” and “Dynasty” (as the music plays during the Sectionals game segment, I swear I expect Blake Carrington to stroll out on the court). But you don’t come here for the atmosphere, you come for the tear-jerking cheese, and it’s here. Basically, nothing more redeeming about this film is as powerful as the boys of the Hickory Huskers themselves, and they do stand the test of time. Ollie is still as nifty and cherubic as I remember, and Jimmy (the “franchise”) still opens my eyes as an awfully handsome farm-boy who carries the team on his back. These are the type of guys who get haircuts every Saturday, who wear their letter jackets every day of their high-school lives, and who you just KNOW have been up in the loft of the family barn with the cheerleaders, discovering what it’s like to be men and growing up accordingly. There simply isn’t a better cast of this sort who can evoke so many boyhood memories in a man and do so convincingly and tastefully. Despite the years, it’s a pleaser.

6. “Rudy” (1993). A college coach once chuckled while discussing this movie with me years ago, then turned deadly serious as he told me, “There’s a Rudy story in everyone’s life, I think.” It was a touching moment, and it makes sense: commitment, perseverance, and determination are what shape a man’s character, and Rudy Ruettiger became one in a hurry at Notre Dame despite incredible odds. What makes this film worthwhile is how incredibly masculine such characteristics become when related to a story of such heart-wrenching power. How else can you explain why this film has been known to make even the most manly of us cry, knowing that if Rudy gets cut, we won’t stand a chance at that job promotion or secret personal goal? Rudy did it, and so can we. Extras: Sean Astin in pads, Sean Astin in a letter jacket, and Sean Astin being carried off the field on his teammates’ shoulders (the real-life Ruettiger remains the only player the Irish have ever done that for).

5. “Bull Durham” (1988). Without a doubt the most overrated comedy in American cinematic history, “Durham” is nonetheless a touchstone for rabid masculinity, outrageously humorous philosophical takes on life and love, and the first in a long line of Costner man-pose flicks. The celebrated “church of baseball” jokes aside, this is one film that plays for a different audience on a level the other 90% will never understand. Cases in point: Costner’s curiously resigned but red-hot sexy cockiness, the humorous and respectfully engaging game scenes, and the whole “guys in the clubhouse” vibe that permeates the whole program. This is one hell of a man’s movie, and despite the groans from baseball purists, it does something phenomenally original with the theme that other baseball films can’t best.

4. “A River Runs Through It” (1992). If we could get what we wished for in an instant, who among us would not want to erase the painful parts of our pasts, selectively replace them with pillars of strength, with a family bond so ideal and strong it would cure every hurt, soothe every rough spot? It’s the stability, the sense of order out of chaos, the magnificent integrity of the subject matter here that almost erases any sense that this is a “sports movie” at all. For what ultimately happens in Norman MacLean’s autobiographical novella is a realization so profound, viewers are caught unaware, having witnessed the passing of a man’s world between generations, across ages and over our created distances. MacLean’s life gets the Robert Redford treatment here, and the effect is nothing short of stunning. The family of men in this film (with the father portrayed by Tom Skerritt, one of the most competent actors in modern cinema) endears itself to the viewer, allowing us to grow with the characters, through shared experiences of joy, adventure, and sadness. It’s about life, and family, and the search for an ideal way of living we can be happy pursuing. The cinematography is rich, the locations bright with inspiration. Just a marvelously moving movie about men.

3. “The Natural” (1984). Leave it to Barry Levinson to make a story so simple seem deeper than Redford’s eyes. As many times as I’ve watched this one, I can’t help but chant its many philosophical one-liners right into next week, mantras divine and justly so because of the source. This is the grand slam of sports movies, wherein dugouts are sanctuaries (christened by Wilford Brimley in a role he was born to play), drawing us into Roy Hobbs’ life story so effectively we actually WANT to cheer for him. The acting is superb: Robert Duvall in another of his subtle and outstanding performances; Glenn Close is a gem; even Kim Basinger turns a wimpy role into a performance worth remembering. But it’s the life lessons themselves that steal the show, such as this bomb dropped on Roy as he sits in a hospital bed, thinking about a life he wanted badly but instead settled for the one he lived: “We have two lives, the one we learn with, and the one we live afterward.” This movie isn’t just about men, a game, and a gift; it’s a movie about the essence of sport and life. A beautiful, captivating, and solemn story.

2. “Breaking Away” (1979). A bittersweet and engaging film set in small-town Indiana, starring a talented corps of pre-Brat Packers who out-perform their roles in a tale of adolescent bliss. Dennis Quaid (in what I remember was his first prominent role) still is a looker here, even with the Carter Administration-era ‘do, and Dennis Christopher became the guy who forced me to ask weird questions about myself years ago. There still is no greater story of a foursome of friends-til-the-death buddies than the Cutters, a crew so tight you’d swear there was more to those quarry swims than made the final reel. Hardly outdated, “Breaking Away” still gives me pause.

1. “Long Gone” (1987). About 8 years ago, one boring weekday night, a bunch of old fraternity buddies of mine and I went to Blockbuster with nothing in mind, and “Long Gone” somehow made it back with us by one pal’s popular demand. Turns out this 1987 HBO special, a low-budget pre-“Bull Durham” tale of a fictional minor-league team in Florida in the 1950’s, electrified me in such a way that I felt as though I was watching the best, most unabashedly homoerotic sports flick I’d ever seen. Nothing has since come close to besting it on several fronts. For starters, the team depicted is the Tampico Stogies, a squad whose uniforms are adorned with a cartoon of some studly Tom Of Finland – type character, cigar clenched between his teeth, up at the plate and meaning business. The whole team smokes cigars and plays ball with such masculine abandon (often simultaneously) it resembles my most secret fantasies of manhood gone wild. Then there are the actors, virile baseball men, sleeves deftly rolled up to just the right height for peeking, gorgeous and sunburnt, starring the highly underrated William Petersen as Stud Cantrell (you heard right), a daddy of a manager whose rough-around-the-edges demeanor makes the whole film. The music is vintage country, including some Hank Williams (Senior) that I’d forgotten was so erotic. The plot? It doesn’t hit the comedic highs of “Durham” itself, but you’ll see the resemblance, and given the distractions all over the place,  you won’t care enough about its flaws not to get taken on its fun, charming ride. Suffice to say it’s a cigar and baseball fetishist’s dream come true, and I bet you can get it on Amazon.com (good luck finding it for rent anywhere). It’s one for the ages, and unintentionally the most endowed film about sports I’ve ever seen.