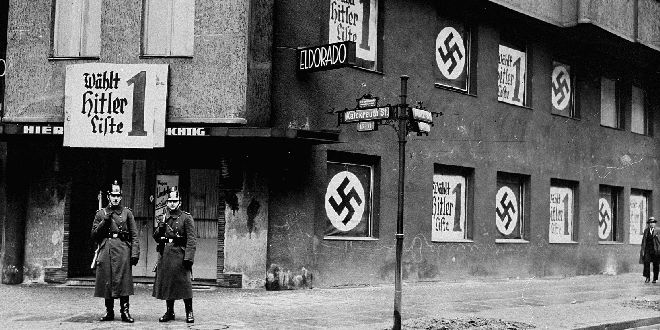 The Eldorado after being closed down by the Nazis. Berlin, Germany

The Eldorado was a famed destination in Berlin for lesbians, homosexual men, transvestites of both sexes, and tourists during the 1920’s and 30’s. As soon as the Nazis came to power, gay bars and clubs like the Eldorado were closed down. The “El Dorado” was situated at 29, Lutherstraße. It had a lavish floor show. It was closed down in about 1932. Clubs with the same name have since re-opened.

“Berlin’s 400 or so bars were divided in tourist guidebooks according to a strict taxonomy of desire. Flush heterosexuals might choose the Kakadu, with Polynesian-style décor and caged parrots hanging over each table; when patrons wished to leave, they could tap their glasses and the bird would squawk loudly for the check. Gay men would descend on the Karls-Lounge, where the waiters and “Line Boys” all wore neat sailor’s outfits. Lesbians liked Mali and Ingel, where guests were obliged to dance with the randy owners, or the Café Olala, where some customers liked to dress in Salvation Army outfits. Male cross-dressers went to the Silhouette, female cross-dressers to the Mikado, and everyone the entire sexual spectrum over blurred at the Eldorado, where one dancer, when quizzed by a slumming grand dame as to gender, replied in a haughty voice: “I am whatever sex you wish me to be, Madame.” ”