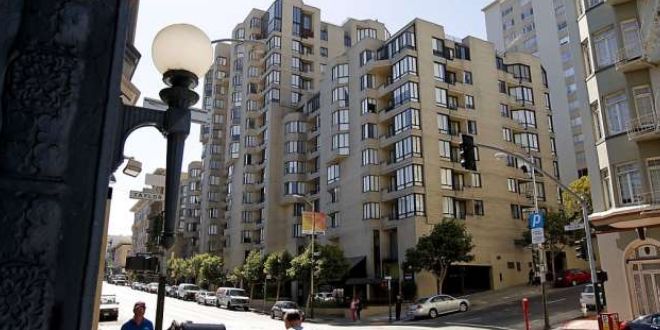 The Site of The Raid, Michael Macor, The San Francisco Chronicle

On Sept. 14, 1961 242 patrons, nearly all of them men, were packed into the Tay-Bush Inn at the Corner of Taylor and Bush in San Francisco. The photo shows the scene – a block of apartments occupies the block where the Inn was. Gary Kamiya tells SF Gate what happened on that night.

“The Tay-Bush was a one-room cafe that drew night owls who danced to its jukebox until dawn. Some walked up the hill from the theater district after the shows let out.

At 3:15 that September morning, three undercover police officers in the bar gave a prearranged signal, the jukebox went silent, a loudspeaker outside blared and uniformed cops barged in. They began herding the patrons onto the sidewalk and arresting them.

The headline on The Chronicle’s story the next day read, “Big Sex Raid – Cops Arrest 103.” The secondary headline said, “139 Get Away.” (Police later insisted only five or so had escaped.)

The story called the raid “the biggest action of its kind in the history of the department.” Many of the arrestees were students, it said. “Others called themselves clerks, laborers, hairdressers; one said he was a psychologist. Police said the men were dancing together and kissing.”

The raid “was reminiscent of the old speakeasy days of Prohibition,” The Chronicle wrote. “Three paddy wagons shuttled back and forth between the inn and the city prison – seven loads in all – and apartment house dwellers watched from their windows.”

Asked by a reporter if any “deviates” had been at his club that night, Johnson said, “Yes, of course. But we have a lot of show people and others – they like the New York atmosphere – you know, brick walls.” ”

Despite having the names of the arrested printed in the papers, charges against all but two of those arrested were dropped. The raid – years before Stonewall – raised a political consciousness in the gay community. The Mattachine Society seized on the incident to push for civil rights.

The Tay-Bush raid made the civil rights of gays and lesbians a legitimate subject for debate, and marked the beginning of the end of San Francisco’s crackdown on gay bars. The SFPD’s final attempt to repress gays took place on New Year’s Day 1965, when police raided an advocacy group’s masquerade ball at California Hall on Polk Street. Even John Shelley, the mayor, condemned the police action. San Francisco was now Gay.

Previous The Eldorado
Next Differences of Sex Development & Intersexuality