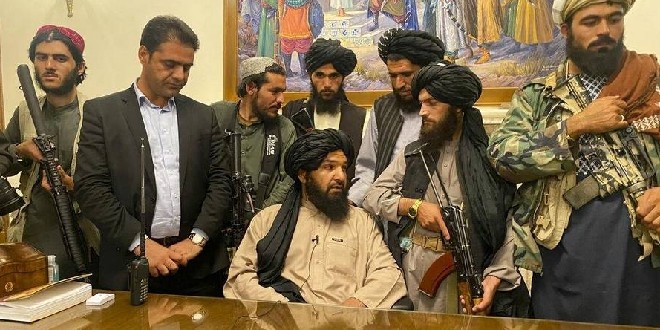 After 20 years, the Taliban are on the verge of returning to power in Afghanistan spelling bad news for the country’s LGBTI+ community.

There are grave fears for the safety of gay Afghans as the Taliban looks posed to regain control of Afghanistan for the first time since 2001.

Overnight, the Islamist organisation began entering the capital, Kabul “from all sides” as President Ashraf Ghani fled the country.

The Taliban ruled Afghanistan between 1996 and 2001 when they introduced or supported punishments based upon their strict interpretation of Sharia law, which included public executions for adulterers and amputations for those guilty of theft.

During that reign of terror, girls over 10 were banned from attending school, cinemas were closed, western television and music were banned, women had to wear burkas and men were required to grow beards.

With the second reign of Taliban terror now looking likely, the country’s gay community are on high alert.

While homosexuality has always remained illegal in Afghanistan, laws making it punishable by death were repealed when the United States invaded in 2001.

That looks set to now change.

Last month a Taliban judge said males found guilty of homosexuality would be, “crushed to death by toppling walls.”

Gul Rahim, a judge in central Afghanistan told German newspaper Bild that the Taliban had already begun to implement barbaric laws and punishments in the regions they controlled.

Among them, making homosexuality punishable by death – by using walls to crush those found guilty of the offence.

The German newspaper reports that the wall must be constructed 8 and 10 feet tall before it would be toppled upon the victim.

It is unclear whether any executions using this method have been carried out yet.

Bild reports: “While Rahim is talking about the gruesome death sentence for homosexuals, he keeps a straight face. For the Taliban, this is a perfectly normal ‘law.’”

Rahim told Bild that the Taliban would implement the measures nationwide once they achieved their longstanding goal of returning to power in Afghanistan in the wake of the US troop withdrawal.

According to Human Rights Watch, there has been no official punishment carried out for homosexuality since 2001, but lesbians and gay men face the possibility of local “justice,” and even honour killings.

Forced marriages of lesbians and gay men are also commonplace.

And now, the Taliban are rolling in, promising a return to their 1996-2001 reign of terror, where gay men were regularly stoned to death, pushed off buildings, and crushed beneath walls.

We cannot even recommend a course of action to help lesbians and gay men in Afghanistan.

There are no LGBTI+ organisations in Afghanistan

Some human rights organisations offer services to gay people, but must do so secretly.

Even these services are unlikely to continue, as the Taliban roll in.

Men and women in Afghanistan will die, and soon, for the crime of loving who they love, being who they are.

And there is nothing that we can do to help them.