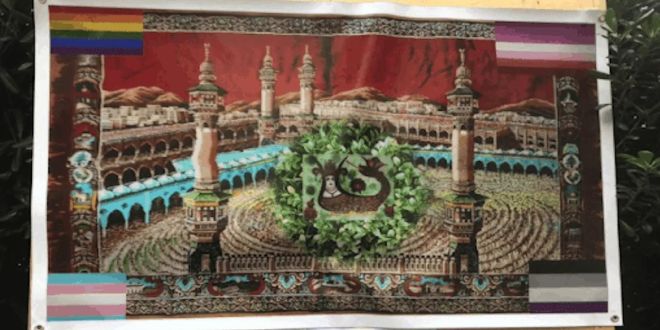 Two detained defendants were released in the trial in which seven students were tried for a collage work in which LGBT+ flags were placed on the image of the Kaaba at an exhibition at Boğaziçi University.

Two students, Doğu D. and Selahattin U., who were convicted of inciting hatred and enmity, were released due to the exhibition of an anonymous collage work on the image of the Kaaba at Boğaziçi University with the Shahmaran figure and LGBT+ flags.

The hearing of the case in Istanbul 21st Criminal Court of First Instance, where seven people, two of whom are under arrest, was held at the 12th High Criminal Court due to the large number of audiences.

All the defendants, including Doğu D. and Selahattin U., who have been under arrest for 47 days, were present in the courtroom. Among those who came to watch the hearing were politicians such as CHP’s Özgür Özel, Ali Şeker, Sera Kadıgil, Canan Kaftancıoğlu, TİP MP Barış Atay and Independent Deputy Ahmet Şık, as well as students’ friends and academicians.

In the case, which was held on the grounds that an anonymous collage work with a Shahmaran figure and LGBT+ flags were placed on the image of the Kaaba in the protests inside the campus, the students are tried with a prison sentence of one to three years on the charge of “publicly denigrating the religious values ​​adopted by a section of the people”. In the case where two of the seven students were put on trial, one defendant is under house arrest.

During the hearing, which lasted about four hours, the judge asked the students “Do you have an LGBTI membership?”, And Levent Pişkin, one of the students’ lawyers, objected to the question.

Stating that it is a constitutional crime to force anyone to explain whether they are LGBTI+ or not, Pişkin emphasized that there is no such organization as “LGBTI” and therefore there cannot be a concept called LGBTI member, “There is a kind of criminalization effort. LGBTI+ society is tried to be criminalized in this way. “There are gay Muslims. There are also homosexual pilgrims. There are also those who go on the pilgrimage among homosexuals.”

On the other hand, when the statement of the defendant Sena Nur B. was taken, the judge showed her in the official courtroom and said, “Is this the picture?” he asked the students.

At the hearing, the defendant’s lawyers stated that the exhibition containing the work in question was only accessible to school students and graduates; He pointed out that the incident was enlarged after the Yeni Şafak newspaper was targeted, and the students were targeted after the issue was reflected in the media.