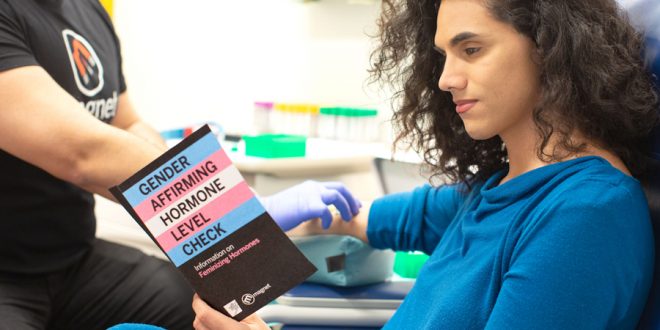 While the individual’s response to feminizing therapy will vary, we have observed several key changes that appear for the majority of transgender women in addition to the general estrogenic effects related.

With the transgender woman, breast tissue growth is basically promoted by estrogens and anti-androgens. Under most circumstances, breast development exceeding a B cup is rare. Development will take at least 2 years to reach maximum size.

Changes in the nipple will likely be somewhat less than in the genetic female. The areola (the small ring of color around the nipple in the center portion of the breast) will change in appearance and size in relationship to the breast.

Soon after beginning hormone therapy (about 2 to 3 months), there will be a nodule-like formation behind the nipple and a feeling of tenderness or sensitivity in the area. This early stage of development is caused by an increase in the ductal system behind the nipple is part of the transition process and will usually normalize in a matter of months.

Depending on how hirsute (possessing hair) an individual’s body may be, body hair will generally lessen noticeably to almost entirely over a period of several years. Individuals will generally notice a diminishment of bodily hair occurring on the extremities, and most of the torso. As example, arm and leg hair as well as hair on the abdomen, chest, and shoulders will greatly lessen and in some instances disappear completely. Hair growth in specific regions including that around the areola, armpits and pubic area will not lessen to the same extent.

The general appearance of the skin, overall, will change greatly by becoming softer and less coarse. With proper skin care, which includes protection against the damaging effects of the sun, the skin’s general appearance will be noticeably enhanced by the influence of estrogen and anti-androgens.

Over a period of time (1 to 2 years time), a change in the subcutaneous fat (located just beneath the skin) will occur. The hips, thighs and buttocks will collect the majority of this distribution, and the tendency to collect fat in the stomach will diminish somewhat. The resulting redistribution will result in a smaller waistline and larger hips.

A good deal of the size that is normally attributed to large or broad shoulders, arms and chest is actually contained in upper body muscle mass—not bones. Through the process of feminization much of the upper body bulk will disappear. Muscle mass will generally take longer to diminish (about 3 years) than the accompanying shift in fat distribution previously mentioned. As upper body mass is lost, a certain degree of looseness may be seen in the skin of the upper arms and shoulders. As is the case with normal weight loss in these areas, a period of one to two years may be necessary for the skin to adjust to the smaller frame.

With regard to appearance, hormone therapy will produce its most marked change in lessening the size of the testes. Due to the influence of estrogen, the testes’ production of testosterone and sperm will be greatly reduced.

Penile size will likely diminish somewhat. While penile skin is used for lining the neo-vagina, the amount of donor skin available is more a matter of inherent size than that of the diminishing effects of testosterone. Sexual function will decrease, but the degree of which is unpredictable. Erections may still continue, but will probably be much less frequent and long lasting, or may not be possible. Ejaculate will lessen, probably to the point of only producing a very small, clear discharge as a result of the prostate and the associated structures responsible for semen production being impeded.

The prostate will diminish in size due to the effects of estrogen and finasteride (Proscar), the latter being administered as an anti-androgen. Beside from the feminizing effect of these medications, both drugs are helpful in the treatment of benign prostatic enlargement. This condition is often responsible for the difficulty with urination experienced by many older individuals. Through the course of hormone therapy, this urinary complaint will likely be relieved.

Coronary heart disease is the leading cause of death in the United States. Due to various lifestyle and hereditary factors, cardiovascular conditions may pose additional risks to those undertaking elective medical therapies, such as the variety of drug treatments engaged in the feminization process. However, the effects of hormonal therapy may be similarly beneficial to the male-to-female transgender patient with respect to arteriosclerotic plaque disease and cardiovascular conditions, as it demonstrates itself in the genetic female population.

Long term use of estrogens may likely result in infertility, with permanent infertility being a distinct possibility. Sexual responsiveness will likely diminish over the course of hormonal therapy, potentially resulting in the inability to achieve or maintain an erection. These effects are the basis for feminizing hormone therapy being termed chemical castration.

Results Not to be Expected

Whatever active hair is present in the beard area upon onset of hormone therapy will remain. Given years of hormone therapy and removal of the testicles, the beard will remain albeit somewhat slower growing and not quite as thick. Naturally, this status is far from acceptable. A method of permanent hair removal, or combination of methods thereof, must be used to rid oneself of facial hair.

Permanent hair removal will show its greatest results by concentrating efforts on those areas least affected by hormone therapy, i.e., the beard area, and leaving treatment of chest hair and the like until last, if treatment is even required at all. See Electrology Guide.

The depth in pitch and resonance of the voice are unaffected by hormone therapy. However, inflection and manner of speech are very well suited to change. Additionally, pitch can be raised through persistent vocal practice. Given the importance of a gender congruent voice, surgical options have been explored in an attempt to alter pitch, but this most delicate of instruments is not likely to be properly retuned through surgery.